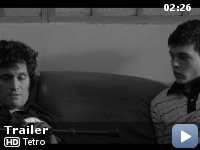 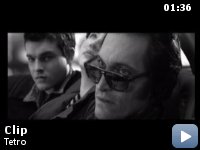 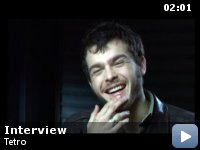 Bennie travels to Buenos Aires to find his long-missing older brother, a once-promising writer who is now a remnant of his former self. Bennie's discovery of his brother's near-finished play might hold the answer to understanding their shared past and renewing their bond.

Storyline
The week of his 18th birthday, Bennie, who's a waiter on a cruise ship, has a layover in Buenos Aires. He seeks out his older brother, Tetro, whom he hasn't seen in years. Tetro, who lives with Miranda, is a burned-out case; he's hot and cold toward his brother, introducing him as a "friend," refusing to talk about their family, telling Bennie not to tell Miranda who their father is. Thoughts of their father cast a shadow over both brothers. Who is he, and what past has Tetro left behind? Bennie finds pages of Tetro's unfinished novel, and he pushes both to know his own history and to become a part of his brother's life again. What can come of Bennie's pushing?

Taglines:
Every family has a past.

The flashback scenes were originally to be shot using 16mm film to truly emphasize past events, but since this type of film/camera was almost out of date the whole film was shot with a digital camera and the flashbacks had to be digitally treated.

Continuity:
Early in the movie Tetro stumbles into the kitchen with a broken leg and knocks over some furniture while lighting a cigarette using a burner on the stove. he ignites the burner by just turning the knob on the stove. A few minutes later Miranda must use a match to light a burner on the same stove-top.

Josefina:
JOSE!
[throws Jose's violin on the road, where it gets crushed by a car]

Tetro:
Those two love each other very much.

The Re-Awakening Of The Giant


Enthralling, captivating. Buenos Aires, maybe? Black and White scope
mostly, the limpid soul and devastating smile of Alden Ehrenreich.
Coppola enjoys his freedom and so do we. At the base of it all, a juicy
melodrama but the master flies over it with a tireless, youthful zest.
Vincent Gallo seem a bit of an odd choice to play the title role and in
fact I just found out that Matt Dillon was supposed to have played it.
It certainly would have added up the romanticism and the sensuality
that runs through it but, never mind. Alden Ehrenreich as Bennie is,
quite simply, fantastic. Maribel Verdu another stand out as Tetro's
loving if long suffering companion. Karl Maria Brandauer is horribly
perfect, a character that emanates the kind of debauchery fame and
rotten ego can provide. "There is room for just one genius in this
family" I saw the film last night and it hasn't left me for a moment. I
can't wait to see it again.

Autopsy
Evangelion: 2.0 You Can (Not) Advance