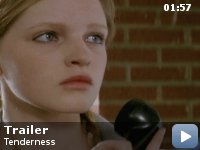 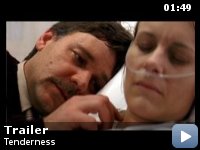 A policeman works to figure out whether a violent teen murdered his family.

Storyline
Three lives. Buffalo detective Lt. Cristofuoro, whose catatonic wife is in hospital, takes a special interest in Eric Komenko, a juvenile who killed his parents and will be freed on his 18th birthday. So has Lori Cranston, 15 or 16, her body fully developed and the object of lust by her boss and her mother's new boyfriend. She keeps a scrapbook about Eric, and when he's released from custody, she hides in the backseat of his car, insisting he take her with him on a trip toward Albany where he's planning to meet a girl. Cristofuoro is certain Eric will kill again, so he follows. It's clear early on that Cristofuoro's probably right, but what's Lori's motivation?

Taglines:
The intimacy of the kill.

Russell Crowe filmed all of his scenes in 9 days.

Continuity:
When checking the back seat of his car for Eric, Detective Cristofuoro cocked his gun and the slide stayed open, showing the gun was unloaded. In the next shot, the gun's slide was closed.

Lt. Cristofuoro:
My wife likes to say there are two kinds of people, those chasing pleasure and those running from pain. Maybe she's right; I don't know. What I do know is this: Pleasure helps you forget. But pain, pain forces you to hope. You tell yourself this can't last. Today could be different. Today something just might change.

It remains an occasionally intense but mostly routine and flat thriller


A man named Eric Poole (Jon Foster), who was sent to prison after
murdering his parents and raping a girl as an adolescent, is released
back into the free world. Living at home and deciding to investigate
the colleges of America, Eric is tracked by a lonely girl named Lori
(Sophie Traub). Lori has been following Eric's release in the papers
and she remembers meeting him once from a brief chance encounter. After
she sneaks into the back of his car, Eric and Lori eventually come
together and stay on the road, gradually remembering when they first
met. Eric is also pursued by an obsessed cop, Detective Cristofuoro
(Russell Crowe), a man who is grieving in having to look after his
paralysed wife.

Though an initially intense and interesting film, Tenderness directed
by John Polson (who previously made Swimfan and Hide and Seek) remains
a rather uneventful and often unconvincing crime thriller. The opening
quarter of the film, while leisurely paced, is constructed to develop
our interest into how these characters are interconnected with each
other. Certainly there are a number of fascinating questions asked;
such as why this teenage girl is unconcerned by the dangers of this
lunatic and why Cristofuoro himself is to obsessed with his own
pursuite, surely not just because of his instincts and his proper sense
of the law. Where the film falls apart though is in its undeveloped
answers to many of these. The girl's eventual fate is a grim and
depressing one, and though we do see portions of her life as being
undesirable – her mother has a new boyfriend moving into their house
and Lori is forced to flash her breasts for a man's pleasure – there is
never a completely satisfying closure to her unhappiness. Furthermore,
Cristofuoro's insistence to follow Eric and try to catch him out leaves
much to be desired for the character. He does not spend a great deal of
time interacting with his target and merely describes it as his hobby.
There must be a stronger grudge between the men, than a mere obsession;
it remains a rather flat and uninteresting part.

As with the script, the performances of the film are relatively uneven
as well. Russell Crowe is always a strong actor but he is at his best
in portraying masculine figures of internal conflict. Here he is given
a fairly routine and slightly disappointing role. His reliance on an
American accent is at times jarring and unnecessary and like in Ridley
Scott's film Body of Lies, he does not seem to have a great deal to do
in the film. For such a powerful actor, his part is quite underwritten
and does not benefit from a substantial level of character development.
Sophie Traub as Lori is reasonable in her role, sometimes exuding
emotion but occasionally irritable in trying to be funny and energetic.
It is most disappointing that we never really reach a deeper
understanding of her unhappiness and discomfort in life. It would have
contributed a much stronger emotional pull to the film. As Eric, Jon
Foster is sometimes intense but mostly blank, never entirely capturing
the chilling sense of menace and dread that he could have. There are
moments that we suspect Eric may succumb to his desires to kill but
this level of tension needed to be more persistent to illuminate the
threat that he is. There are certainly some assets to the film; the
flashbacks to Eric's brutal crimes are used to show his current
struggle of emotions. Yet as with Lori, we never gain a significant
insight into his true psychosis.

Tenderness would have benefited from a stronger script that would allow
more opportunities to delve into the anxiety of both a teenager and the
internal confliction of a teenager. As it stands, it never reaches the
heights of a film like The Woodsman and it remains an occasionally
intense but mostly routine and flat thriller that owed a lot more to
the abilities of its star, Russell Crowe.