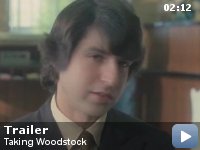 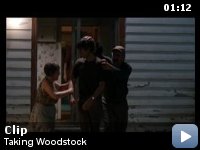 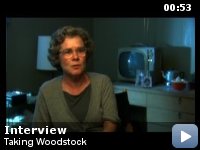 A man working at his parents' motel in the Catskills inadvertently sets in motion the generation-defining concert in the summer of 1969.

Storyline
A man working at his parents' motel in the Catskills inadvertently sets in motion the generation-defining concert in the summer of 1969.

Taglines:
"A Generation Began In His Backyard."

The guitarist and white percussionist (playing an udu) in the El Monaco Bar Band during the limbo scene are members of the funk/folk band Flearoy.

Frank:
Well, okay. We got a lot of dairy farms around here, right? And a fair number of bulls. Okay, you've all heard of the running of the bulls in that town in Spain, Pampoona.

Frank:
Well, no one's doing one in the Catskills. Seems to be a big draw over there.

Annie:
It would be very amusing to see all those Jews from Levitsky's summer colony, you know, the ones with the black top hats and the curls, running for their lives chased by our local livestock. Wouldn't that be a wonderful sight!


If you want to have a real sense of the concert and the mass of young
people who attended, as a crowd, by all means check out "Woodstock"
from 1970. It's all there, the music, the rain and mud, the buzz on the
soundtrack replicating the buzz on the sound system at Yasgur's Farm.


But if you want to get a feeling of what Woodstock meant on a personal
level, then Ang Lee's your man and you've come to the right place.

How Lee managed to film this recreation without using real footage, I
have no idea. That's apparently what he did.

There in a number of shots is the hillside, mud and slop, with the
stage below. The few food stands and portable johns at the top of the
hill. The winding pathways through the side venues of jewelry, art, a
class for this and a political table for that. The long narrow road
that still leads off of New York State Route 17B to the Yasgur hillside
where it happened.

It rained a lot, but there was sun, this was mid-August and Lee bathes
us in the warm glow of peace. Especially true to the event as I
remember, the state cop who returns a peace gesture, the locals making
sandwiches and offering water from hoses.

Everyone who was there and lucid has a personal remembrance. Mine began
on Friday evening with air mattresses not more than 50 feet from the
stage and ended with the sacrifice of a blanket abandoned on the
mudslide the hill had become by early Sunday morning. In between, I
managed to shuttle down state route 55 and into New Jersey the back
way, after the music ended Friday night, Saturday morning. Then back
from New Jersey up the same road and finally ending about two miles the
other side of the concert where the vehicle stayed untouched until it
was reclaimed near dawn on Sunday.

By that time, all though I'd only had a few generous puffs of weed,
freely offered by those who had some, I was hearing double and it was
time to pack it in.

Yes, the brown acid warnings from Chip Monck (name?), the event "voice"
echo'd in the acid trip of Demetri Martin, the young son who blunders
into inviting the event to White Lake. The colors and details are
incredible as seen from his eyes, slowly beginning to shift and then
expanding until the hillside is undulating in waves around the lit
stage below. A remarkable shot.

Martin won't win any academy awards; Imelda Staunton might for her
portrayal of his paranoid Jewish mother who has hidden a fortune while
her rundown motel is nearing foreclosure. And an honorable mention
should go to Liev Schreiber as the cross-dressing former Marine who
provides security at the motel.

Stereotypes? Sure. Few hippies ever were as mentally vacant as the
Earthlite players. Did anyone buy Emile Hirsch's early post-Vietnam
anguish? Fortunately, it was left on the doorstep of the main film and
Hirsch's character later rings true. Just a high school buddy come
home.

But see the film for its personal feel, very true to the event. The
wish that Dylan would arrive. The helicopter flights to the medical
tent. (only a small number of half-a-million needed any treatment at
all.) The question, what about the boys in Vietnam. As one girl says on
17B, "Wish they were here." I was back just a little more than a week.
Went with an Army buddy I'd never see again. Yet no one gave us grief
for our short hair, mandatory to get out of Vietnam.

The music? Well, Arthur Lee and Love are the perfect accompaniment to
the acid trip inside the bus (they never played at the festival.) When
the early strains of Friday night's music begin to waft over an idyllic
lake where dozens of kids bathe nude, it's Arlo Guthrie and I caught
myself thinking, damn, it was dark when Guthrie appeared. But that was
forty years ago and the memory can't be trusted.

Just the personal feeling. And despite some of the weaknesses in the
subplot, Ang Lee did get the feeling right.

For the personal memories, he absolutely nailed it!