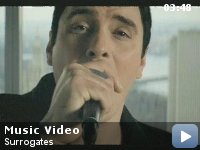 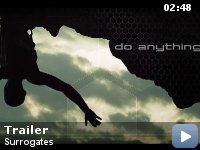 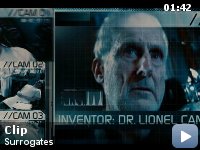 Set in a futuristic world where humans live in isolation and interact through surrogate robots, a cop is forced to leave his home for the first time in years in order to investigate the murders of others' surrogates.

Storyline
People are living their lives remotely from the safety of their own homes via robotic surrogates — sexy, physically perfect mechanical representations of themselves. It's an ideal world where crime, pain, fear and consequences don't exist. When the first murder in years jolts this utopia, FBI agent Greer discovers a vast conspiracy behind the surrogate phenomenon and must abandon his own surrogate, risking his life to unravel the mystery.

The unusual shoulder patch worn by Colonel Brendon is the 26th Infantry Division. A former division of the Massachusetts Army National Guard, it has been deactivated since 1993. The insignia is actually a stylized "YD", for their nickname, "The Yankee Division".

Revealing mistakes:
Maggie's hands in the final sequence read too young. They are the hands of a younger woman.

The Prophet:
Look at yourselves. Unplug from your chairs, get up and look in the mirror. What you see is how God made you. We're not meant to experience the world through a machine.

GOOD SCI-FI STORYLINE, but not unforgettable

Surrogates is a sci-fi movie about a future where every human being can
connect their bodies into machines & they instantly live a different
life through their robotic human-looking surrogates. Anybody can just
stay home all day while they are connected online with their surrogates
that can just easily live outside in the real world. But when a
surrogate was killed along with its user, FBI agent Greer unravels a
conspiracy that can lead to the death of billions of lives.


The storyline of this movie falls somewhere around the categories where
movies like Blade Runner, Minority Report, and I-Robot belong. A movie
that talks about how future technologies can affect human life and
provide some philosophical point-of-view that is worth pondering on.
The idea of technology progressing into and reaching the boundaries
that it becomes an abomination of nature. The movie tends to be thought
provoking, but does not make it good enough to be worth an entire
evening of discussion.

There were some moments that seemed preachy, but could have been
delivered more effectively if given a proper execution or
interpretation. I am talking about the moments when our main character
realizes the beauty of a world free from technological complexities. We
also have the minor subplot of a corporation just concerned about
safeguarding their own products. And a main character coming to the
realization that these products eventually diminish the humanity of a
person.

It is surprising that the weaker point of this movie is the action. The
terminator rip-off scenes seemed bland and there was a chase scene with
a female surrogate that looked goofy because it employed a "superhero"
type of action. To make it worse, there are some visual effects that
look like they've been rendered 15 years ago.

With the main character of Bruce Willis running around in his actual
human form for most parts of the movie, we realize that he basically is
the weaker person in this world of robotic mannequins, and yes we do
see him bleed a lot in this movie (it is funny to note that Willis is
one of those actors that just look cooler when he gets more scars and
bruises, it's like John McClane only without the crazy action). With
him being the frail character, that alone clearly reminds you that this
is not your regular Bruce Willis action flick. The movie just basically
starts out as a futuristic detective-type movie then progresses into
the same mood as Willis was in films like "Unbreakable" where he
stumbles around a maze that leads him to some enlightening truth.

The high points of this movie lie in the storyline. Second is the way
the movie creates this amazing-looking world of a future inhabited
mostly by surrogates. The surrealism of the movie is not too far-out
that most of what you see seem like they exist in the present world;
there are no flying cars or rockets everywhere; its just the simple
existence and presence of mannequin-like robots everywhere. The
storyline may be good enough to be enjoyably satisfying, but it
certainly is not the best, or perhaps not good enough to be
groundbreaking.

All in all, SURROGATES is one of those good sci-fi movies that will
simply entertain those who are fans of smart sci-fi movies. Action
junkies may be a little disappointed though. This is a far cry from
Blade Runner, but this certainly gives you a cheaper version of that
kind of enjoyment. I loved it. But it is definitely not unforgettable.