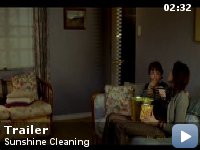 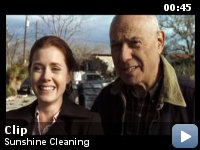 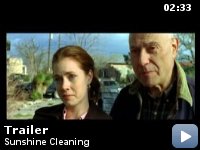 In order to raise the tuition to send her young son to private school, a mom starts an unusual business — a biohazard removal/crime scene clean-up service — with her unreliable sister.

Storyline
A family. Rose and Norah, in Albuquerque, lost their mother when they were young. Rose is responsible – a housecleaner, raising her seven-year-old son Oscar. She's also having an affair with Mac, a married cop, her high-school sweetheart. Norah can't hold a job. Their dad, Joe, is quirky. When Oscar is expelled for odd behavior, Rose wants to earn enough to send him to private school. Mac suggests she clean up after crime scenes, suicides, and deaths that go undiscovered for awhile. Rose enlists Norah, and Sunshine Cleaners is born. Norah bonds with the dead, Rose finds out that it's a regulated business, and complications arise. Can a family marked by tragedy sort things out?

Above and Beyond Worker

Boom mic visible:
About 54 minutes into the movie, when Oscar is crossing a street, a microphone can be clearly seen on the top left corner of the screen for a few seconds.

Talking Deer Head:
Attention all fellow deer. If you find deer feed in the middle of the forest, be a bit suspicious.

A Blunt Ray of Sunshine through the Darkness


A struggling single mom named Rose (Amy Adams in her comedy/drama
wheelhouse) gets tired of working for a maid service and boldly decides
to branch out into crime scene clean-up with her lay-about sister Norah
(Emily Blunt, ironically named) in Christine Jeffs' observant and
easy-going "Sunshine Cleaning".


Although it has been marketed as one of those quirky dramedies the
studios love to shove down our throats every year, Jeffs' film (from a
solid screenplay from Megan Holley) is more in tune with somber yet
hopeful indie character studies. The film deals with some dark subject
matter and poignantly explores grief and family dysfunction but
maintains a positive outlook and contains some solid situational
laughs. The combination of an interesting set-up, smart writing,
likable characters and winning performances make the film, even when it
teeter-totters from dark to sappy, go down smooth. None of the
characters seem forced upon us, unlike the overtly quirky family from
"Little Miss Sunshine" or the stylized dialog spewing teens from
"Juno". These characters talk and interact like real people and there's
a naturalism in the way their relationships develop.

It makes for engaged viewing when a film like this doesn't feel the
need to explain every detail or tie up every loose end so nicely. Some
subplots involving Norah taking a personal interest in one of the
clean-up jobs that leads to an awkward friendship with a blood-bank
worker (Mary Lynn Rajskub of "24" fame) or a one-armed supply store guy
(Clifton Collins Jr.) who takes a shine to Rose aren't resolved in a
typical fashion, and some things are never made known or left
open-ended. It makes the film feel truer to life. Even when Rose's
precocious kid (Jason Spevack) tries to talk to heaven on a CB radio in
what would normally be considered a contrived and cutesy moment, you
feel like you've grown to know the character and it's just something he
would do. Likewise, Alan Arkin as the sisters' scheming entrepreneurial
father behaves and acts like a real guy who's had to struggle raising
two girls alone and is just trying to help them catch a break.

Amy Adams, of course, is an absolute delight. Something about her
girl-next-door good looks combined with her innate talents as a
comedienne and her theatrical background that produces some of the best
facial expressions and crying-on-cue you'll ever see make her the
perfect choice for this type of role. While it's easy to sing the
praises of Adams, and she's never been more endearing or relatable than
here, Emily Blunt proves to be an excellent foil. It's Blunt's sharp
portrayal and her character's story arc that provide the film its
emotional weight. Both actresses deserve to be remembered come awards
season, and "Sunshine Cleaning" is that rare spring-time bird: a film
worthy of buzz.

TagsUSA
While She Was Out
Shinjuku Incident