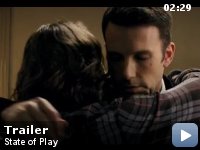 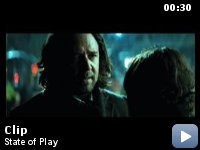 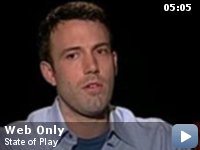 A team of investigative reporters work alongside a police detective to try to solve the murder of a congressman's mistress.

Storyline
A petty thief is gunned down in an alley and a Congressman's assistant falls in front of a subway – two seemingly unrelated deaths. But not to wisecracking, brash newspaper reporter Cal McAffrey who spies a conspiracy waiting to be uncovered. With a turbulent past connected to the Congressman and the aid of ambitious young rookie writer Della Frye, Cal begins uprooting clues that lead him to a corporate cover-up full of insiders, informants, and assassins. But as he draws closer to the truth, the relentless journalist must decide if it's worth risking his life and selling his soul to get the ultimate story.

Brad Pitt nicknamed the film "State of Delay" after being stalled on it.

Revealing mistakes:
In the photograph that shows Sen. Stephen Collins with his fellow Gulf War soldiers, it is obvious that Ben Affleck's face has been edited into the photo.

Cameron Lynne:
I want you to do a complete rundown on this Sonia Baker: who she knew, who she blew, the color of her knickers.


Congressman Stephen Collins (Ben Affleck) is helping with the
government investigation of a shady military-based company when he
receives word that his mistress has committed suicide. Visually
distraught, he leaves a hearing in tears and sets off a media circus.
Seasoned reporter Cal McAffrey (Russell Crowe) was his roommate in
college, and the two have remained friends. In a bid to quash the
political blogging of junior reporter Della Frye (Rachel McAdams),
McAffrey sets out to find the truth about the story.


State of Play sets itself up early on to be a cookie-cutter,
predictable thriller. But as the film progresses, it rather quickly
becomes the twisty and conniving thriller it needs to be. Despite being
heavily dialogue driven, the film is an intense ride that will keep
people on edge throughout. Some scenes are downright terrifying in
their amped up suspense and political intrigue. This film really set
out to be tense, and succeeds wonderfully. It knows just what punches
to pull, and when to pull them.

The script, written by political scribes Matthew Michael Carnahan, Tony
Gilory and Billy Ray, is insight and intriguing. It could have easily
been made boring and inundated with rehashed politicalisms (like all of
their last films), but this film revels in how interesting it becomes.
It has laughs strung throughout (a genuine surprise), and lacks the
nerve to become loaded to the brim with facts and innuendos. Instead,
it expertly weaves between scenes, amping up the intensity of some
scenes, and downplaying others.

But this is mainly due to the incredible performances by the cast.
Crowe (who I usually loathe) and Affleck are simply outstanding in
their roles. Age issues aside, both play their character with finesse
and charisma. Affleck looks and acts like a confused
wet-behind-the-ears, gunning-for-higher-office political pawn from
beginning to end. Some of the reactions on his face are downright
devastating in how excellently they are conveyed. And this is a guy
critics once said could not act. Coupled with one-two shot of acting in
Hollywoodland and directing Gone Baby Gone, we may be seeing a renewed
resonance and importance for the Oscar-winner. Crowe on the other hand,
delivers his strongest performance in years. While he has been
downplayed and underused in his last few films, he carries this film.
He is stubborn and vaguely likable, but he makes his character work for
all of his idiosyncrasies and ethically-questionable tactics. He makes
a seasoned journalist look like an amateur.

McAdams, all but a ghost recently, holds her own against the two
heavy-hitters and delivers a performance that is both inspired and
emotional. It gives her a lot of room to act, and she delivers in every
instance. The rest of the cast is a bit mixed however, as so little of
them is given that much to do. Harry Lennix, Robin Wright Penn, Jeff
Daniels, the horrifying Michael Berresse and especially Jason Bateman,
all deliver noteworthy performances, but never get to really shine in
them. They all have their traits and motivations, but get little screen
time to truly express them. They each are developed quite strongly, but
they lack the movement afforded to Crowe, Affleck and McAdams. I simply
loved Helen Mirren's scenery-gauging editor and all of her subtleties.
But she too, is downplayed to the point of almost barely being in the
film.

Despite its intensity, the film is bogged down by its dialogue-heavy
scenes and consistent character additions. It is easy to keep track of
everyone, but so many people are introduced that the film loses its
focus on more than one occasion. It makes for a few scenes that are
merely filler between the scenes of useful heavy acting. It just feels
so tiring. I understand now how daunting a task it must have been to
convert six hours of British television into a 127-minute film, but
there are scenes that are just too easy to not have been cut out (some
entire mildly useful subplots may have helped). Adding characters in
makes sense for a story about two journalists frantically searching to
lift the lid on a story, but there needs to be more emphasis on what
was needed and not needed. A brilliant montage in the middle of the
film goes almost entirely to waste because the filmmakers lack the
knowledge of what should be cut. Limiting the preposterous and silly
climax could have also done wonders. The scenes that are left in the
film (including the finale) are great, but they could have been
stronger if they were as tightly wound as the film wants itself to be.
A little less shaky hand camera movement could have also significantly
benefited the film.

Even with its problems, it is clear from the on-set of the first shot
in the bullpen at the Washington Globe that the filmmakers are going
for a very keen sense of homage to All the President's Men. While the
on-going and very professional relationship between McAffrey and Frye
is very similar to Woodward and Bernstein, the fabric of journalistic
integrity and researching are the core of State of Play. The film is
loaded with allusions to the Oscar-winning film, and even mimics shots
right out of the film. While it is obvious for anyone who has seen Men,
this film's nods are done in such a delicate and unique way that they
never become distracting or blatant. The film is its own, and does not
ever feel like it is living in its big-brother's shadow. It is a fresh
take on old-fashioned reporting in a very digital age, and frequently
walks the tight line of old versus new.

State of Play looked interesting, and surprisingly delivers on almost
every count. It is not a perfect film, but it is a solid example of
great film-making. It wants to be more, but seems content at being a
twisty and suspenseful modern thriller.