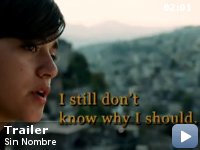 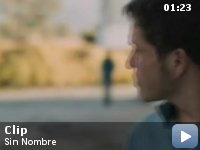 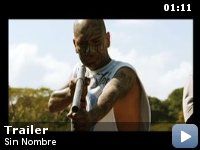 Honduran teenager Sayra reunites with her father, an opportunity for her to potentially realize her dream of a life in the U.S…

Storyline
Honduran teenager Sayra reunites with her father, an opportunity for her to potentially realize her dream of a life in the U.S. Moving to Mexico is the first step in a fateful journey of unexpected events.

Taglines:
The greatest sin of all is risking nothing.

Cary Fukunagra spent two years researching the film, spending time with people on the trains and with gangsters in Central America. He also used two gang members to script edit making the slang and language as up to date and realistic as possible

Errors in geography:
Towards the end of the film, the city labeled as "Reynosa, Tamaulipas" is actually "Monterray, Nuevo Leon."

Sayra:
Back home, my friend Clarissa made me see this crazy neighbor, Doña Eleanor, you know, like witchcraft? She smoked this puro, then told me with her freaky voice that I'd make it to the U.S. but not in God's hand, perhaps in the Devil's.

Without a name indeed…


Let's be clear from the outset, this is a dark, bleak and violent
movie. The episodes in-between the on-screen savagery, consist of a lot
of regret, anxiety and a deep, deep sadness.

Having said that, I also think that this is one of the most important
movies I have seen in quite awhile, buried unfortunately amidst the
clutter of beginning-of-the-year garbage releases and the upcoming
summer blockbusters. I wish this movie had a much higher profile, in
fact I think that this movie should be required viewing in high-schools
all across North America, USA and Canada in particular.

It should also be seen by all those people who think about immigrants
as a pest and as parasites who come to take away their jobs and be a
drain on their resources, abusing the social system or whatever. The
same people who watch Lou Dobbs and his "one man crusade" to save
America from the invading plague of illegals. The minute-men who
gleefully think that the wall now separating the US from Mexico is the
greatest thing since the pyramids. The same people that after having
spewed their vitriol, hatred and bile against immigrants have no
problem with Juan mowing their lawn and Consuela looking after their
snot-nosed mortally obese children, and Miguel picking-up all the s*it
they leave in the streets, malls and every other place one can throw
garbage in.

Maybe, just maybe, watching this movie will at least give them a
glimpse into the lives, backgrounds and destinies of these people, who
are abused, mistreated and forgotten by almost everybody, people who
basically have come to symbolize a type of disposable human garbage,
that truly are without a face, an identity and "sin nombre", without
name. Perhaps we could all come to understand what it is that drives
these waves of humanity to risk it all for even the promise of a better
future. Then we could all come to realize that "life, liberty and the
pursuit of happiness" are not exclusively American values, but rather
universal values to which all people aspire to.

Even amidst all the doom and gloom of the movie there are some sublime
moments of beauty, humanity and yes even hope. It was quite hard at
times for me to watch this movie, not because of what I saw, but
because I can relate to what I saw and be reminded of a time in my life
I wish I could forget, but know I can't. It will be part of me until
the day I die. I want people to learn and understand instead of being
so quick to judge and dismiss the plight of other fellow human beings.

WHAT WOULD YOU DO IF THE SITUATION WAS REVERSED?