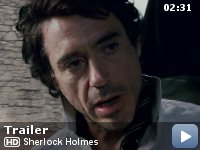 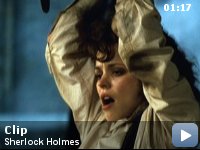 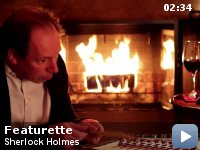 Detective Sherlock Holmes and his stalwart partner Watson engage in a battle of wits and brawn with a nemesis whose plot is a threat to all of England.

Storyline
After finally catching serial killer and occult "sorcerer" Lord Blackwood, legendary sleuth Sherlock Holmes and his assistant Dr. Watson can close yet another successful case. But when Blackwood mysteriously returns from the grave and resumes his killing spree, Holmes must take up the hunt once again. Contending with his partner's new fiancée and the dimwitted head of Scotland Yard, the dauntless detective must unravel the clues that will lead him into a twisted web of murder, deceit, and black magic – and the deadly embrace of temptress Irene Adler.

Director of photography Philippe Rousselot used a special high-speed digital camera specifically to film the Punch Bowl fight sequence. The key moment where Holmes punches his opponent's jaw was filmed one second in real-time and turned into a seven-second shot without additional post-production aid.

Continuity:
When Holmes and Watson are taken to Lord Blackwood's slaughter house, they both jump from the Lucy into the shallow water near shore and make their way to the building. In the very next scene, their clothes are dry.


… not the movie, but the number of self-professed Holmes aficionados
who apparently have no knowledge of Holmes. For the record, Holmes was
a miserable, irresponsible drug addict who did indeed sleep on the
floor, insult his best friend, experiment on his dog, and never ever
wore a deerstalker's cap (at least, not until television was invented).
He was a brawler who practiced martial arts and was as likely to slum
around in the filthiest of rags as he was a suit.


It wasn't until after Doctor Watson took him in hand that he truly
refined himself and became a "respectable" member of society. And yes,
we can tell that this movie takes place THAT early in their
relationship because Watson has not yet married his wife (the
retconning did annoy me, too, by the way, but you just can't avoid a
little re-imagining here and there).

Speaking of unavoidable, Irene Adler, Holmes' one uncapturable (is that
a word?), simply had to be cast as a potential love interest. The
flirting, the romance, and the near-make-out session were irresistible
to the director (and to all of the audience who're honest with
themselves).

That being said, I felt Robert Downey, Jr. played Sherlock Holmes to
perfection. His characteristic caustic attitude towards Lestrade and
even Watson at times was exactly how I'd imagine him. He gives several
summations of his observations and deductions that brought Holmes to
life in an almost unparalleled way. His fight scenes (preceded the
first few times by superhuman calculations) show both the mental and
physical sides of Holmes in ways that Watson's notes can't quite
convey, but at which they constantly hint.

As for Watson himself, Jude Law delivered a wonderful performance. I
was a little skeptical of how well he fought, given Watson's wartime
injury, but his character and demeanor were entirely on the nose. His
loyalty to Holmes despite his frustrations with him could not have been
captured more expertly, I feel. No one, no matter how patient or
forgiving, could endure Holmes forever without the occasional
confrontation. The original Holmes, after all, was not above insulting
his best friend or even deriding his deductive capabilities at times.
Nevertheless, Watson never could abandon his friend in his time of
need.

This version (or vision, if you will) of Sir Arthur Conan Doyle's
greatest creation may be more swashbuckling, more thrilling, and more
edgy than any other incarnation, but that doesn't make it any less
faithful to the original. Aside from a little revisionist history in
the cases of the female leads, nothing is that far out of the ordinary;
and no amount of references to Madonna will change that.