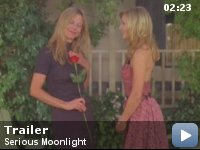 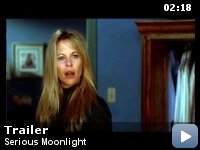 A high-powered attorney duct tapes her adulterous husband to the toilet … right before their home is invaded by burglars.

Storyline
Louise wants to find a way to reconnect with her husband, Ian, who is divorcing her after many years of marriage. But when she surprises him at their country home, she is more than slightly dismayed that the roses and romantic set-up are not for her but for his much younger mistress. Louise takes matters into her own hands, and abducts Ian duct-taping him to the toilet, where he must admit to his true feelings and he is unable to leave her. Things grow exceedingly awry for everybody when a burglar shows up at their house, and then everybody must discover and admit to their true feelings.

The ending is dedicated to actor and director Adrienne Shelly who was murdered in 2006 when she caught a man, who had broken into her office, stealing money from her purse.

Continuity:
In the scene where Sara arrives and Louise has to tape Ian, the tape almost touches his left side-burn while, when coming back to the house the tape now is far from it.

Louise:
[on the phone]
Michelle.

Louise:
I threw heck to the wind and drove up to the country a day early, want to surprise Ian, spend the long weekend with him. So, I need you to call Metler and tell him that the papers were filed yesterday and everything is fine, and I will talk to him first thing on Monday morning. Then call my dentist, cancel my appointment, and reschedule it for Tuesday afternoon. And then cancel my meetings for the rest of the day. You know what to do, that's why you are my assistant. Kiss, kiss, kiss.


Based solely on its trailers this movie is already getting a bad rap
online, with many lambasting it as some 'chick' flick revamp of 'French
Kiss'. Don't believe that hooey. This is a dark comedy worthy of
Hitchcock, and it's far, far removed from Meg Ryan's past 'sweetheart'
roles.

'Serious Moonlight' is a simple, character-driven story of what happens
when high-powered lawyer Louise (Meg Ryan) finds out her husband Ian
(Timothy Hutton) plans to leave her for his younger mistress Sara
(Kristen Bell). Louise holds Ian hostage, the better to make him
explain what happened to their marriage. Eventually, an unexpected
visit by Todd (Justin Long) forces husband, wife, and mistress to
confront their situation in an unexpected manner.

As director Cheryl Hines suggested at the Austin Film Festival Q&A
before and after the movie, the film's plot really centers on Ian's
character development. I have to agree, and I also think Hines was
right when she said that Timothy Hutton was perfect for this role.

And while some might take Louise's decision to tie her husband up as
pathetically desperate, I found it entirely believable that such
drastic action would be necessary to make a man talk about his real
feelings – especially when he's doing something as unoriginally asinine
as finding 'real love' with a younger woman. It's no accident that Sara
looks conspicuously like young Louise, I think, and much of the movie's
subtext is about the difference between early passion and long-term
commitment.

This movie often feels like a play in the best sense, focusing on small
moments and realistic conversation. Its short length stops it from
feeling stage-y, however, and the actors all convey their lines with
wonderful subtlety.

Hines also described the meticulous process of reading through the
script with the actors to determine what was funny and what wasn't. I
think this was nothing short of genius; so many non-traditional
comedies lose the distinction so you're not sure what the intent of any
given scene is. Perhaps because of her strong background in comedy,
Hines wisely avoids this pitfall, making the movie's laughs
razor-sharp, but balancing them with genuinely tense moments.

I won't tell you how the movie ends, because there's a bit of a twist.
But I will be very curious to see what happens when it's released. I
suspect that there will be some controversy about the how the film
treats the battle of the sexes, and I fear some men might cower in the
face of Louise's character — Ian certainly does, at least at first.
But that's almost the point, and I'm glad to see a woman-authored,
woman-directed view of male infidelity for once.

This darkly comic movie is definitely worth seeing, in my opinion, and
given how seriously funnylady Hines takes her job as director, I
sincerely hope to see more of her work soon.

TagsUSA
The Road
The Alphabet Killer