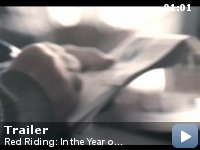 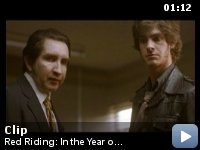 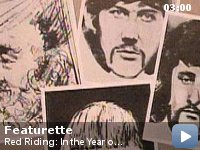 A rookie journalist looks to solve the increasingly vexing case of a serial killer on the loose.

Storyline
In 1974, Eddie Dunford, comes home from South England and gets a job as a cub reporter for the Yorkshire Post. A schoolgirl has gone missing, and Eddie suspects it's one of several crimes dating back six years; the police think not and blame gypsies. Eddie digs; the police stonewall him then two of them beat him after he visits the widowed mother of one of the girls missing for a few years. When a child's body turns up at a construction site of local building magnate John Dawson, Eddie has another thread to pull. By now, he's begun an affair with Paula, the widowed mom, and he suspects collusion among Dawson, the police, and his newspaper – but what are they covering up?

The title of the trilogy, "Red Riding", derives from two main sources – Yorkshire, the location of the crimes, and Red Riding Hood, the traditional tale. Yorkshire, a county of England, is divided into three sections or ridings. The action takes place in the West Riding. One of the girls who goes missing is wearing a red anorak or hooded jacket, and one of the attackers bears the nickname, Wolf.


I'll start by saying that I was expecting to like this before I watched
it. Whether that had a bearing on my judgement, I can't really say.

'Nineteen Seventy-Four' has shades of 'Taxi Driver', the narrative
framed not by the steam that rises from the streets of New York City
but instead by the skies of Yorkshire. The comparison between the two
movies really occurred to me most strongly at the end of the film and I
think you'll see why.

The acting is spot on from everybody. I can't think of one performance
that stands out for the wrong reasons. Andrew Garfield is excellent in
the lead role and Sean Bean is on form.

The exploration of police corruption and the struggle for both revenge
and justice resonate well beyond the ending of the film.

The cinematography is excellent and it is disappointing that films of
this quality have to be shown on television because they won't find
enough of an audience in the majority of British cinemas.

TagsUK
Open Graves
The Boys Are Back