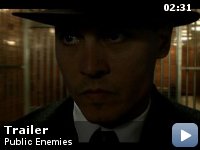 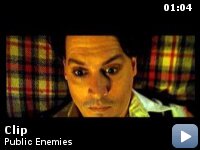 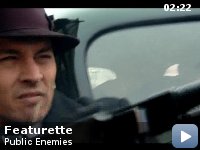 The Feds try to take down notorious American gangsters John Dillinger, Baby Face Nelson and Pretty Boy Floyd during a booming crime wave in the 1930s.

Storyline
This is the story of the last few years of the notorious bank robber John Dillinger. He loved what he did and could imagine little else that would make him happier. Living openly in 1930s Chicago, he had the run of the city with little fear of reprisals from the authorities. It's there that he meets Billie Frechette with whom he falls deeply in love. In parallel we meet Melvin Purvis, the FBI agent who would eventually track Dillinger down. The FBI was is in its early days and Director J. Edgar Hoover was keen to promote the clean cut image that so dominated the organization through his lifetime. Purvis realizes that if he is going to get Dillinger, he will have to use street tactics and imports appropriate men with police training. Dillinger is eventually betrayed by an acquaintance who tells the authorities just where to find him on a given night.

In preparation for his role as Melvin Purvis, Christian Bale met with Purvis's son, Alston, and several close friends of the real Melvin Purvis in order to learn his attitudes, mannerisms, and speech patterns. By the same token, Johnny Depp went to the John Dillinger Museum in Indiana and was allowed to read some of his letters. According to Depp in the DVD documentary, he even tried on the pants Dillinger wore the night he was shot. With a laugh, Depp says the pants fit him perfectly.

Anachronisms:
Throughout the movie many buildings are seen with double paned tempered glass and aluminum window frames. Most notably the FBI planning meeting across the street from the Biograph takes place in front of a large storefront with two large panes forming a corner joint with no framing. All windows of the period were single pane.

John Dillinger:
I was raised on a farm in Moooresville, Indiana. My mama ran out on us when I was three, my daddy beat the hell out of me cause he didn't know no better way to raise me. I like baseball, movies, good clothes, fast cars, whiskey, and you… what else you need to know?


Who was John Dillinger? We all know he was a flamboyant criminal who
robbed banks, but who WAS he? The question of who Dillinger WAS is far
more interesting than the question of what Dillinger DID, but this
film, sadly, chose only to concentrate seriously on the latter and gave
up almost immediately on the former.

This film goes out of its way–with a poor grasp of history's
time-line, by the way–to show us what Dillinger did and who he hung
around with, but it does next to nothing to explore who Dillinger was
as a person or even as a criminal. It hints that Dillinger might be a
passionate lover and loyal friend, but shows us little evidence aside
from a few thrown-together seduction scenes (which make his
girlfriend/heroine look like a dim-witted pushover) and an awkward love
scene.

Even Dillinger's foil, Melvin Purvis, is a mystery in Mann's hands. Did
he care about justice at all, or was he just a fascist on a personal
crusade? Was he competent in the least or was he just a bumbling idiot?
Squinty-eyed stares can only convey so much, after all.

Michael Mann seems to be in a terrible hurry to tell this story, as he
is stuck between the rock of having to relate a relatively complete
"crime-ography" of a notorious American gangster and the hard place of
keeping the movie shorter than 2 1/2 hours.

As a result, a beautifully shot and edited movie that had a lot of
promise ends up little more than a dumb, shoot-'em-up action movie
wearing the fedora of "historical romance." Good for a date, but not a
serious film.

Grade: C+. Things to look for: Mann's ham-handed and laughably obvious
political commentary on the use of torture about 2/3 of the way through
the movie; psychotically trigger-happy Baby Face Nelson well-played by
Stephen Graham; cool old products (Zenth radio); great fashion sense.

TagsFBIUSA
Evangelion: 2.0 You Can (Not) Advance
The Girlfriend Experience