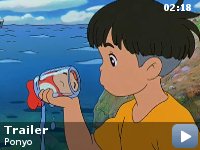 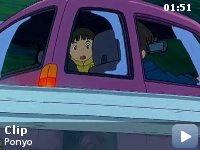 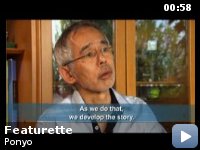 An animated adventure centered on a 5-year-old boy and his relationship with a goldfish princess who longs to become human.

Storyline
The son of a sailor, 5-year old Sosuke lives a quiet life on an oceanside cliff with his mother Lisa. One fateful day, he finds a beautiful goldfish trapped in a bottle on the beach and upon rescuing her, names her Ponyo. But she is no ordinary goldfish. The daughter of a masterful wizard and a sea goddess, Ponyo uses her father's magic to transform herself into a young girl and quickly falls in love with Sosuke, but the use of such powerful sorcery causes a dangerous imbalance in the world. As the moon steadily draws nearer to the earth and Ponyo's father sends the ocean's mighty waves to find his daughter, the two children embark on an adventure of a lifetime to save the world and fulfill Ponyo's dreams of becoming human.

Taglines:
Welcome To A World Where Anything Is Possible.

Sôsuke is based on Hayao Miyazaki's son Goro Miyazaki, when he was five years old.

Sosuke:
Look at her. Isn't she pretty?

Kumiko:
That's the most boring goldfish I've ever seen in my entire life!

All the Enthusiasm of Finger Paints


Gake no Ue no Ponyo is like something you might get if you mashed My
Neighbour Totoro into The Little Mermaid, then put the entire project
in the hands of a five-year-old animation prodigy. The film is
simultaneously stunning in its beauty and endearing in its simplicity,
unrestrained enthusiasm walking the edge between inspired brilliance
and mind-addling delirium.

In the opening sequences, literally thousands of individually animated
fish swirl across the screen—a task Western animators wouldn't touch
without a room full of computers. And yet the film's omnipresent water
is defined by hard lines that seem to have been drawn in with crayons
and coloured by pastels. In style and content, this is clearly a
children's fantasy, and yet it isn't.

Remarkably, Miyazaki has yet again achieved what he created in Totoro:
a film that draws the viewer indelibly into the world of children,
reminding us of the time when every discovery was unique, every
possession precious, and the agony of loss crouched behind every
well-meaning mistake. Perhaps this is why the film has appealed more to
adults than to children in Japan: children still live in this world.
They need no such reminders.

Sousuke, a five-year-old who retrieves the eponymous Ponyo from the
ocean, is not another Pinocchio-like screen caricature. He is a real
boy. He is intelligent yet careless, deeply conscientious but
distracted by impulse. He grounds us in a world that wavers between the
real and the surreal.

Wide-eyed wizard Fujimoto, voiced with narcoleptic mania by comedian
Tokoro Joji, is by far the most rational of the film's fantastical
creations. He's an oddball, but he makes sense. But when waves begin to
lap at the doorstep to Sousuke's hilltop home and the townsfolk
jovially pile into rowboats to scud over a swollen sea of prehistoric
fish, we begin to wonder whether this is the real world or some
beatific daydream. Miyazaki draws no clear distinction.

Gake no Ue no Ponyo is a children's love story, driven with
monomaniacal ferocity by Ponyo and Sousuke's pure mutual affection.
Composer Joe Hisaishi underscores this intensity, calling up mighty
swells of strings to accompany Ponyo's first ascent to the surface, and
later evoking Wagner's Ride of the Valkyries in a stunning sequence
where Ponyo chases down a speeding car while running atop a cascading
tsunami of gigantic fish.

While the film loses much of its energy—though none of its
eccentricity—in the final act, Miyazaki has nonetheless succeeded in
creating yet another modern fairy tale. It is a simple, pure vision,
guilelessly washed across with a devoted kindergartener's finger
paints.