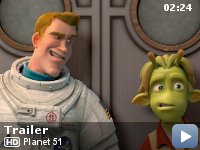 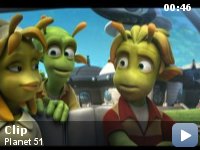 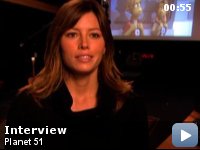 American astronaut Captain Charles "Chuck" Baker lands on Planet 51 thinking he's the first person to step foot on it. To his surprise, he finds that this planet is inhabited by little green people who are happily living in a white picket fence world, and whose only fear is that it will be overrun by alien invaders…like Chuck!

Storyline
Lem is just an average teenager working on getting the girl and furthering his career at the local planetarium – except that he's an alien. At least to U.S. astronaut Captain Charles T. Baker who lands on Lem's planet hoping for a quick flag plant and a hasty return to earth and his millions of screaming fans. But on this alien planet the media has tagged spacemen as brain-eating, zombie-creating monsters, causing Baker to run for his life and into Lem's house. Now it's up to the green native to get the clumsy astronaut back to his spaceship before military dictator General Grawl and mad scientist Professor Kipple manage to exterminate the Earthly visitor.

girl:
I've never gone parking before. I'm really not that kind of a girl.

boy:
Well, I'm not the kind of a guy who would go with *that* kind of girl.

boy:
There's nothing to be scared of.
[as alien craft rears up in front of them]

We all liked this film – This is a REAL review of the movie.


First, I'll let you know about our demographic (to help you decide if
you will relate to my review or not): I am a parent of a 10 year old
boy, a 7 year old girl, and a 2 month old baby. I am in my early 30s,
and my wife is in her late 20s. We are moderate movie-goers, as in, we
watch a fair number of movies, and we miss a lot of movies. I am
University educated, my kids are fairly typical of their age, and my
wife is also fairly well educated.

We decided to go to this movie with our children at 9:20 PM on a
Saturday Night which was actually also our 11th anniversary. It was a
bit of a risk, and considering the rating that this movie seems to
have, it could have ended horribly (considering it was our anniversary)
We all quite enjoyed this movie. It's not overly complicated, but it's
got a fairly unique plot, decent script, excellent character
development, and it seems to steer clear of some of the more cliché
stereotypes that could have plagued this type of movie.

It's pure fantasy, and it's nearly 100% kids movie, but we adults
didn't have to "suffer" through it. My wife and I laughed heartily at
much of the situational humour; both my kids laughed uproariously at
most of the silly funny moments, and the situational humour. The
visuals were quite pleasing, without being annoying (I find the latest
3D craze with so many movies rather annoying, for example). The voices
were well cast, the scripts and voice-acting was well done and quite
seamless. I didn't find myself thinking, "I know who that voice is!" at
all, because it wasn't something that popped into my mind.

So, I gave this a 7. Why not higher?, you might ask. Well, it's not
ground-breaking, it wasn't epic, and it wasn't a movie that leaves me
thinking about something for a long time. It wasn't lower because there
was nothing blatantly bad about this show. It was all enjoyable, and
none of us regret having seen this show on our anniversary.