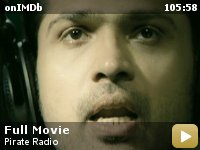 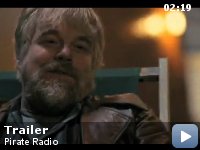 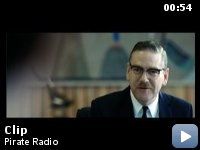 A period comedy about an illegal radio station in the North Sea in the 1960s.

Storyline
"The Boat That Rocked" is an ensemble comedy in which the romance takes place between the young people of the '60s and pop music. It's about a band of rogue DJs that captivated Britain, playing the music that defined a generation and standing up to a government that wanted classical music, and nothing else, on the airwaves. The Count, a big, brash, American god of the airwaves; Quentin, the boss of Radio Rock — a pirate radio station in the middle of the North Sea that's populated by an eclectic crew of rock and roll DJs; Gavin, the greatest DJ in Britain who has just returned from his drug tour of America to reclaim his rightful position; Dave, an ironic, intelligent and cruelly funny co-broadcaster; and a fearsome British government official out for blood against the drug takers and lawbreakers of a once-great nation.

The scene in which Young Carl sulks about Marianne was originally supposed to be about eight seconds long and contain nothing but Tom Sturridge sitting on a bench and looking sad. Will Adamsdale and Ike Hamilton happened to be there, so Richard Curtis told them to have a go at what they would have done if their friend was in the same situation. He put on 'So Long, Marianne' and they came up with everything that remains in the scene.

A toe-tappingly good movie well worth paying to see


I watch a lot of films but have never felt as compelled to review one
on IMDb as this. If only because most of the reviews already out there
either contain groundless slatings or are badly written.

Yes the soundtrack is amazing and will be a huge success. With artists
such as The Kinks, The Turtles, Procol Harum, Cat Stevens, The Hollies,
The Who, David Bowie, Jimi Hendrix and Cream it'd be almost impossible
not to produce a top quality double-CD album. The right music also
seems to come on at all the right times complimenting the movie
perfectly.

But I've heard people say the acting was weak and wooden, which is
completely unfounded. Admitedly there is a fairly large cast which does
mean the plot can never focus on one character for too long and
perhaps, in theory, one or two of them should have been cut out.
However in practise I can't think of a single character that I wouldn't
have missed.

It's only very loosely based on fact but does still manage to educate
in the sense that many young people wouldn't even have been aware of
the existence of pirate radio before watching. It's a refreshingly
original film too, unlike anything out at the moment.

The humour can be childish at times (rude character names, a
falling-out-of-bed joke) but only adds to the "this is meant to be fun"
tone of the movie and is easily overlooked should it be a pet hate of
yours.

Don't let the critics put you off going to see The Boat That Rocked –
if you don't have kids and don't live near a 3D Cinema this will be the
best film out in theatres and available to see until it stops showing.
Certainly worth your time and money.

TagsEnglandLondonUK
The Boys Are Back
The Yellow Handkerchief