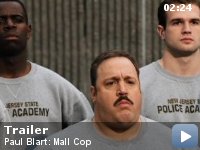 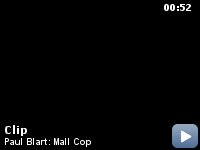 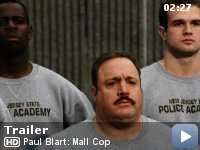 When a shopping mall is overtaken by a gang of organized crooks, it's up to the a mild-mannered security guard to save the day.

Storyline
Paul Blart is a mild-mannered, dutiful family man who works as a security guard in a New Jersey mall. For years, he has applied to become a cop, but he always fails the physical exam because he is overweight. One day, a gang of organized criminals put the mall under siege and take hostages. Blart becomes trapped inside, and because of his sense of duty, refuses to leave. He thus becomes the police department's eyes on the inside and attempts to stop the criminals on his own.

Taglines:
Now, Help Is On The Way. Until Then, There's Paul Blart.

Gary Valentine is featured as the singer at the karaoke bar, a reference to his Comedy Central Presents special where he gets the audience clapping on beat to start the show and approaches the microphone, only to punchline it with, "Man, I wish I could sing. This would be the perfect time!"

Revealing mistakes:
As the film progresses, the amount of light during the outdoor scenes varies. In some indoor scenes, which are supposed to take place after the mall has closed at night, bright sunlight can be seen shining in the doors from outside.

Drill Instructor:
Alright you have all completed the written exam, however, you must now pass the obsticle coarse to be admitted into the training program. And remember: Survive this and you are on front lines of keeping New Jersey safe.

About as good as a movie called Paul Blart: Mall Cop could be


If Paul Blart: Mall Cop had been made 20 years ago, it would have
starred John Candy. That's a complement, by the way. Candy had a knack
for playing bungling, yet good-hearted people who mainly wanted to
please. He certainly specialized in playing people who tried too hard
to be nice to cover up past pain. There's a lot of this in Kevin James'
performance as the title character here. He's more than just a comic
goofball. James turns him into a likable and surprisingly sympathetic
hero that we find ourselves cheering for by the end.


Kevin James rose to fame on television starring on the sitcom, The King
of Queens, and has been trying to break into movies for a while now.
He's acted along side stars like Will Smith and Adam Sandler, but this
is his first shot at a stand-alone starring role. Sandler is still
there behind the scenes (His Happy Madison production company produced
the film.), but this is James' film all the way, and he doesn't waste
the opportunity. His Paul Blart is admirable in a way. He's overweight
and he suffers from hypoglycemia, but he always tries to do the right
thing. He's passionate about his job as a mall cop, but he'd really
like to be a police officer on the street. He's taken the physical
entrance exam many times, but his health problems have prevented him
from finishing. He makes up for his shortcomings by being the best mall
cop he can be, and by also being a good single father to his teen
daughter (Raini Rodriguez), who respects him and wishes he could fall
in love again. Paul has his eyes on a young woman named Amy (Jayma
Mays), who also works at the mall. The first half hour or so of the
film is devoted to Paul's life, and it certainly helps us get into his
corner when the actual plot kicks in.

It's Black Friday, the busiest shopping day of the year, and some high
tech criminals stage a lock down and a hostage situation at the mall as
they pull off their theft plan. They place motion sensors and small
bombs at the entrances, so no one can get in or out. They think they've
removed everyone from the building, but didn't notice Paul was in the
back of the arcade playing Guitar Hero. When he emerges from the
arcade, he quickly learns about the hostage situation, and discovers
that both Amy and his daughter are amongst them. This kicks off the
main action, where Paul must use his resources around him to out think
and outrun the criminals while keeping everyone alive. I liked this
aspect of the story, and how Paul Blart actually has to be clever in
order to outsmart the captors. The movie is rated PG, so it's never too
violent or scary for kids, which is the perfect target audience for the
film. They'll like the film's gentle and goofy humor, and accompanying
adults may find themselves charmed by Blart himself.

I never laughed out loud while watching this movie, but I did smile a
lot, and I found myself caring more about the main character than I
imagined. Let me tell you, that's more than I expected walking into a
movie called Paul Blart: Mall Cop. There's plenty of sweetness during
the early moments, establishing Paul's shy relationship with Amy, and
the caring one he shares with his daughter. When the time comes for him
to be a hero, we can cheer for him, because the movie makes him into a
true underdog. He's constantly battling with his own shortcomings and
health issues, and it's clever the way he keeps on finding ways to keep
himself going, driven by saving the ones he loves. If I'm making the
movie sound too serious, it's not. There's plenty of slapstick gags,
surprisingly no bodily fluid or toilet humor to be found, and some
pretty good physical comedy on display. If there's any major
shortcoming to be found, it's that the movie is pretty inconsequential,
and will probably be forgotten by me a few months from now.

Still, considering the kind of junk that usually clogs theaters in
early January, Paul Blart certainly is not bad. I imagine the movie
will make a good rental, since its somewhat small scale will make it
perfect for watching on TV rather than the big screen. If anything,
it's one step closer to making James the cross-over star he obviously
wants to be. I wouldn't mind seeing the same kind of likability he
gives here in a less juvenile script. He's on to something here, he's
just gotta find the project where he really knocks one out of the park.