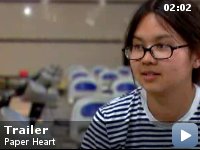 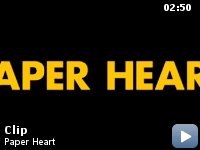 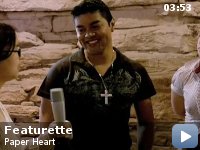 Charlyne Yi embarks on a quest across America to make a documentary about the one subject she doesn't fully understand: Love.

Storyline
Charlyne Yi embarks on a quest across America to make a documentary about the one subject she doesn't fully understand: Love. Michael Cera becomes the object of her affection. Weaving together reality and fantasy, Paper Heart combines elements of documentary and traditional storytelling to get at modern romance.

Taglines:
A story about love that's taking on a life of its own.

Charlyne Yi:
What is true love?

Little girl:
Love is when you love each other so much, like us girls love Chris Brown


As you may have noticed with all the comments, this movie might be
mediocre, terrible, great, or some weird combo. I'm one of those who
think this was a great movie, but I hope to explain the discrepancies.

First, let's get my biases out of the way, so that you can judge my
comment accordingly. I am a Michael Cera fan. I am an indie movie fan,
but not an aficionado. I wanted to see this movie. I'm a young guy who
likes some romantic movies, but they have to be rather good. I didn't
know anything about this movie aside from what the trailer tells me. I
think that does it.

A lot of the comments on IMDb about this movie center around the
format. I agree that the style is important to talk about, but not the
only thing. The style is documentary, but with certain deviating
aspects. It isn't Blair Witch Project; it has decent editing and
lighting. The angle is natural, all from a guy or three carrying
cameras. Certain scenes are done in paper cutouts in paper scenery and
wires for movement. These are usually the scenes that they didn't catch
on camera and are important to the plot. These scenes are really
charming because of their scale and their construction.

The "acting" is also good. The most controversial aspect of this movie
is the content, or the plot. Some think that this movie is either
simply an observation of life or a movie about an observation of life.
Either real or reel, some might say. I tend towards some middle ground.
I think that this movie is a documentary about real life including a
documentary about real life. There are staged things and things that
look really genuine, so I think that it's more of an embellished real
story. The cynic in me thinks that a lot of it is fake, but they did a
really convincing job so I hope its all real.

If you are an optimist, this story will be really cute and lovable. If
you believe it to be faked, it's a bad movie. That is why I think it is
mostly genuine, if not completely. If this was produced in any really
directed way, it would not have included some things in it that it did.
But then again, they could have included it to make you think that.
Whether you're paranoid about that sort of thing is beside the point.
This movie feels very real. I know some of my dates were almost exactly
like some in this movie. Charlyne is believable and so is Michael Cera.

Michael Cera plays a really cool guy with a cute awkward disposition.
If you're a fan of Michael Cera, you'll recognize his characteristic
style, but now I believe that style to be more of just how he is
instead of an acting style. Regardless, he's endearing. Charlyne is
also really lovable because she's funny and easily embarrassed. The two
are quite genuine and work really well together because of their
similar personalities.

Overall, a cute and lovable movie. The ending is unsatisfactory, but
that's because there is no end that would fit the story and remain
truthful to real life.