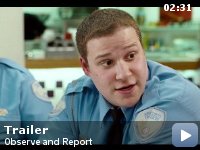 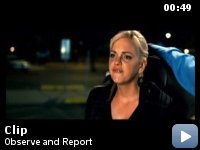 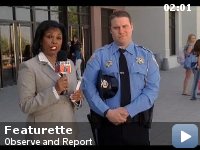 Bi-polar mall security guard Ronnie Barnhardt is called into action to stop a flasher from turning shopper's paradise into his personal peep show. But when Barnhardt can't bring the culprit to justice, a surly police detective, is recruited to close the case.

Storyline
Ronnie Barnhardt lives with his alcoholic mother. He's chief security guard at Forest Ridge Mall, where he's in love with Brandi, a cosmetic sales clerk, and gets a free coffee each day from Nell, a cheery clerk in the food court. A flasher haunts the mall's parking lot, and at night, thefts occur. Ronnie is intent on catching the criminals but has no investigative skills, is delusional about his abilities, and makes mad accusations. His bête noire is Detective Harrison, the city cop sent to investigate. Ronnie thinks he could be an officer, thinks he stands a chance with Brandi, and slowly loses his self control. Will reality set in? What about redemption?

Warner Bros. was concerned about the dark subject matter and demanded the production team come up with a "lighter, softer" version of the film. It wasn't until test audiences gave the edited version poorer test scores than the original version that Warner Bros. let them release the film in its original form.

Dennis:
Y'all hurt Ronnie, and nobody hurt's Ronnie.

The most depressing 'comedy' in years

It is indeed a sad day for this society when a film like "Observe and
Report" is marketed as a "comedy." And as such, it is the worst I have
seen in several years ("Fool's Gold" comes immediately to mind). It's
the dark side of "Paul Blart" mixed with elements of "Taxi Driver,"
"Fight Club" and "American Beauty," with none of the intrinsic interest
or excellence of any of those films.

When cosmetics salesperson Brandy (Anna Faris, who brings the same
great sense of comedic timing here as she did in "House Bunny"), is
flashed, Ronnie takes it upon his delusional self to become her
protector and solve the crime; even though he has no skills for such an
endeavor.

Plus, he's a major a-hole, to boot. He threatens vendors, is a blatant
racist, terrorizes customers, violates security procedures and
basically sexually harasses Brandy (even forcing her to go out with him
and then date-rapes her). Yet, after all of this, he is not once
reprimanded by his sappy superior.

Not to read too much into this, but what mall would keep a security
guard around that a) has a restraining order out on him by one of the
store owners and b) tasers some guy for no reason. Wouldn't there be
major legal ramifications here? Or am I just a dope for asking? Of
course, Ronnie lives in a hovel and has to deal with an alcoholic
mother (Celia Weston), so maybe he's not totally at fault.

Acting as the any-man for this movie, Ray Liotta ("GoodFellas") is LAPD
Det. Harrison, who plays cruel jokes on the idiot, such as leaving him
in the middle of South Central and gleefully informing him that he was
not accepted into the academy.

There's a good reason, too, as Ronnie blurts out to the police
psychologist that he dreams of taking a shotgun and killing everyone.
Yeah, I want a guy on the force to carry those plans around with him.

Then, just when we thought the humor could not get any lower, the film
takes a weird and violent turn as Ronnie's best friend reveals a
terrible secret and then he takes on the LAPD for some bizarre reason.
All the while, a pretty girl at the doughnut counter, Nell (Collette
Wolfe), is becoming more attracted to the crazed loser (another example
of "reel" life vs. "real" life).

Most of the laughs here were nervous giggles as opposed to the
out-and-out belly ones most movies of this ilk illicit. I found myself
smiling during just two short scenes; not the greatest endorsement for
such a genre. Once again proving that F-bombs – even repeated over and
over – or laughing at retarded people do not necessarily make a great
comedy.

Marketed as a light, vulgar laugh-fest in the vein of "Role Models" and
"I Love You, Man," this dark effort is a truly awful film in every
sense of the word, even though director Josh Hill ("The Foot Fist Way")
attempts to populate it with eccentric, Jarmusian characters. Most of
these come off like his leading man, inept, moronic, violent and a
complete waste of time.

Just like the 86 minutes I spent watching this drivel.

TagsUSA
Mary and Max
In the Electric Mist