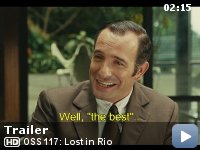 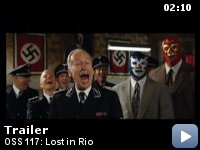 Hubert Bonisseur de la Bath, aka OSS 117, is the French spy considered by his superiors to be the best in the business…

Storyline
Hubert Bonisseur de la Bath, aka OSS 117, is the French spy considered by his superiors to be the best in the business. The year is 1967 – he's been sent on a mission to Rio de Janeiro, to find a former high-ranking Nazi who went into exile in South America after the war. His eventful investigation takes him all across Brazil, from Rio to Brasilia and the Iguazu Falls, accompanied by a charming Mossad agent who is also looking for the Nazi. The man is charming, and so is the young woman. Set to the strains of bossa nova, their tale is by turns an adventure and a love story.

This is not the first spy spoof to be set in Rio, Brazil.
Kiss the Girls and Make Them Die did this during the 1960s and both these movies have a fight sequence atop the Christ the Redeemer of the Andes statue. This 1960s spy spoof film is well known for having connections with the later James Bond movie,
Moonraker (See: http://jamesbond.ajb007.co.uk/mr66/).

Continuity:
In the Nazi party shoot-out, the sculpture of David has his privates blown off by gunfire, but they are clearly in tact during a following scene.

The fine art of humor


OSS 117 is a french secret agent, a very very french one. His new
mission is to exchange a microfilm for money with an ex Nazi in Brazil.
for this mission, he will have to team up with a Jewish sexy secret
agent and the hippie son of the ex-Nazi. Whatever…The story is not
that interesting, this is a parody of 007, a fine one. here, the hero
is stupid and old fashioned, but sure to be the opposite. every single
line he says is full of anachronism and ignorance, he has no idea of
what he's dealing with and he's kind of childish. But he's the best
french agent. Hubert Bonisseur de labathe is our own french Austin
Power, for a more mature audience. Here, the laugh comes from the gap
between the world OSS thinks he lives in and the real world, and the
fact that, even facing the real world, he never changes his mind. The
first episode was great, funny and thrilling, a complete absurd spy
movie. this one is funnier, because now, we now the main character is a
complete idiot, but he always gets what he wants, even if quite don't
understand how.