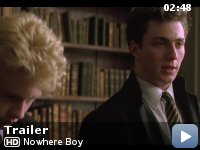 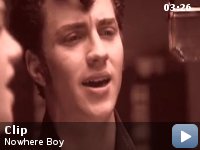 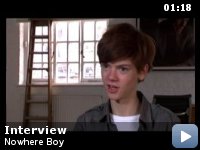 A chronicle of John Lennon's first years, focused mainly in his adolescence and his relationship with his stern aunt Mimi, who raised him, and his absentee mother Julia, who re-entered his life at a crucial moment in his young life.

Storyline
The story of John Lennon's childhood and teenage years from 1944 to 1960, his relationship with his aunt Mimi and his mother Julia -the two dominant women in the first part of his life-, his first meeting with Paul McCartney and George Harrison, their friendship, their love for music and the birth of The Beatles.

In this film David Threlfall plays Anne-Marie Duff's brother-in-law. In the series
Shameless he played her father.

Continuity:
When offering a cheek to kiss on John and Julia's first outing she offers her left cheek when the camera is behind John but when the camera switches to a side view she is offering her right.

John:
There's just no point hating someone you love.


Upon reading other comments, this film clearly polarizes viewers. I
suggest you read the comment by someone called Phantom Fan who sums up
a lot of the story and emotional content quite well in my opinion. As a
result I need not repeat. I am old enough to remember the Beatles in
their climb to fame, but this film is not about that. The film is about
John Lennon at 15. This seems to annoy some viewers. If a person reads
the ads and sees the trailer: it clearly says JOHN LENNON AT 15. So
whining about the film not being about John Lennon at 25 and not being
about The Beatles seems as though someone did not pay attention to the
film's advertising information. What we do have however is a superb
production set in the mid 1950s as rock n roll grabbed teens and John
Lennon (aged 15) realized some emotional hard truths about his family
and himself. It just these key emotional Lennon family earthquakes that
is the story of this film. Not 'How The Beatles met". The tug of love
between two brittle sisters and the increasingly shocked and troubled
Lennon let us glimpse the deep ruptures in his romantic psyche that saw
his scorching opinions and acidic wit build. This is a great film, the
art direction and set design allow the viewer to feel as though they
are there in those rooms on those days. Aaron Johnson is possibly too
handsome for John and is photographed to boost his genuine beauty; the
photography and the direction are terrific. Interesting for Australian
cinema goers is that we are fortunate to have had two award winning
films previously about similar family backgrounds: CAREFUL HE MIGHT
HEAR YOU from 1983 written as a memoir by Sumner Locke Elliott about
his life at 6 years old being bounced between two warring aunts and an
absent father is almost identical family (flashbacks) background to
NOWHERE BOY. Also Eric Bana's 2008 film with Kobi Smit McPhee called
ROMULUS MY FATHER is almost a flip-side between a Dad trying to save
his son from an unstable mother and her lovers. So perhaps we in Oz are
better more willing to applaud NOWHERE BOY on this basis. I found every
part of this film compelling and thought Johnson great casting for
young Lennon. The two sisters and their unraveling personal issues from
their fraught past made excellent drama. I went with it all and I
suggest you do too. But be prepared to let it inform you rather than
you demand 'a Beatles movie'. My only niggle is the fey depiction of a
15 year old cherubic sissy styled Paul McCartney. NOWHERE BOY went
somewhere for me.