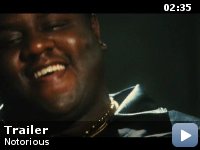 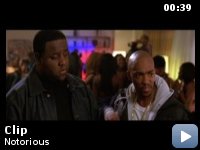 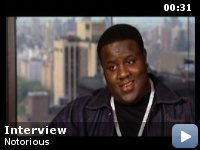 The life and death story of Notorious B.I.G. (a.k.a. Christopher Wallace), who came straight out of Brooklyn to take the world of rap music by storm.

Storyline
NOTORIOUS is the story of Christopher Wallace. Through raw talent and sheer determination, Wallace transforms himself from Brooklyn street hustler (once selling crack to pregnant women) to one of the greatest rappers of all time; THE NOTORIOUS B.I.G. Follow his meteoric rise to fame and his refusal to succumb to expectations – redefining our notion of "The American Dream."

Taglines:
No dream is too big

Most of the film was adapted from the book, "Unbelievable: The Life, Death and Afterlife of the Notorious B.I.G." by Cheo Hodari Coker. Writer Reggie Rock Bythewood revised Coker's draft.

Anachronisms:
In the middle, when Biggie was crossing the street to talk to a woman, A Ford Crown Victoria stretch taxicab with the new NYC Taxi decals is seen. But Ford did not create a stretch Crown Victoria until 2002, And The new taxi decals were not used until mid-2007, 10 years after Biggie's death.

Sick of people writing things that make no sense !


First off, I went to see this movie, just left as a matter of fact and
I think the movie was very well done. For the people saying that the
movie was anti-climatic, what was the climax supposed to be ? We all
know how it ends, or should they have added more to the story for
dramatic effect so we could then talk about how fake it was, and how it
didn't really happen that way ? They told it the way it happened It
seems that many people are forgetting that this was a movie about
someone's life, not somethingfabricated or concocted simply for the
purpose of entertainment. It is supposed to tell a story,his story and
if you are a true fan of B.I.G. then that should be the reason you went
to see it. What good would that have done to his legacy to fill the
movie up with speculation about who did what, if anything it just would
have reignited the war between east and west for trying to implicate
people in the shooting. The purpose was to show that behind the persona
of Big Poppa was a real person, a person that loved and was loved by
many people. Honestly its silly to be upset about the fact that it
doesn't tell you who shot Pac, or B.I.G.,why diminish from the memory
of either by using Biggie's life story to speculate on something that
no one but those responsible, knows the answer to ? Also Pac, though I
am a huge fan of his music as well, is just a supporting character,
this movie wasn't about him, it was about Christopher Wallace, the man,
the son, the father and the husband. I get sick of people making
comments with no basis or foundation. Of cours things are going to be
left out, it's inevitable,seeing as how you can't fit 24 years of
someone's life into 2 hours of film, they put in the parts that were
relevant to the story of how he came up, his brief career which
introduced him to us all, and his tragic ending. I for one was touched,
I bobbed my head, I laughed, I reminisced and I cried, and for 1 movie
to evoke that many emotions, I say it's a job well done. I for one
think B.I.G would be proud, so if you are one of those people that
don't even like rap music, then here's some advice:don't even post a
comment, better yet don't go see the movie, keep your negative comments
to yourself. For those that loved B.I.G he was special to us, and
deserving of his story being told just like anybody else who has left
us and had their story touch our lives. He left a void, and hip-hop
hasn't been the same since he left us. I loved the movie, and would
gladly pay my $6.50 to see it again.