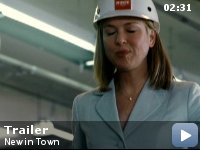 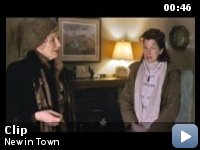 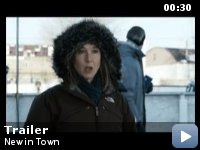 A Miami businesswoman adjusts to her new life in a tiny Minnesota town.

Storyline
A high-powered consultant in love with her upscale Miami lifestyle is sent to a middle of nowhere town in Minnesota to oversee the restructuring of a blue collar manufacturing plant. After enduring a frosty reception from the locals, icy roads and freezing weather, she warms up to the small town's charm, and eventually finds herself being accepted by the community. When she's ordered to close down the plant and put the entire community out of work, she's forced to reconsider her goals and priorities, and finds a way to save the town.

Taglines:
She's an executive on the move. But her career is taking her a little farther than she expected.

In the trailer, Lucy loses control while driving on the ice lake, hitting several ice huts. The scene doesn't appear in the film.

Errors in geography:
New Ulm is not "a few miles down the road" from the Mayo Clinic; it's over 100 miles away. Minneapolis and St. Paul are larger and closer to the Clinic.

Blanche Gunderson:
And that's okay? It's okay to pull the rug out from under folks as long as it's nobody that you know? It's okay because we're just silly podunk Minnesotans, right? We talk funny and we ice-fish and we scrapbook and we drag Jesus into regular conversation. We're not cool like you, right? So we don't matter.


My daughter and I really enjoyed this film. We weren't expecting much,
but were pleasantly surprised by the humorous take on Minnesota life.
Yes, the accents are overdone and no, it isn't really 10 degrees below
zero from November thru April here in Minnesota, but those
exaggerations aside, it did hit on many "traditions" like meatloaf,
polka music, hunting, blizzards, and ice fishing. If you are from
Minnesota, Wisconsin or North Dakota, you will most likely understand
all of the one-liners and euphemisms. If you haven't experienced life
in the frozen tundra of the upper Midwest, this movie will probably not
make sense to you. Also, the actors in this film seemed to be genuinely
enjoying themselves. I can't recall ever noticing that in any other
movie I've seen. It just seemed very genuine and sincere to me.