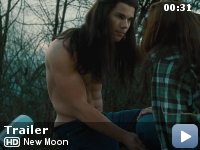 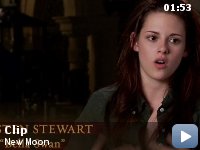 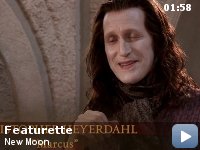 Edward leaves Bella after an attack that nearly claimed her life, and in her depression she falls into yet another paranormal relationship- this time with werewolf Jacob Black.

Storyline
After Bella recovers from the vampire attack that almost claimed her life, she looks to celebrate her birthday with Edward and his family. However, a minor accident during the festivities results in Bella's blood being shed, a sight that proves too intense for the Cullens, who decide to leave the town of Forks, Washington for Bella and Edward's sake. Initially heartbroken, Bella finds a form of comfort in reckless living, as well as an even-closer friendship with Jacob Black. Danger in different forms awaits.

Taglines:
The Next Chapter Begins

Dakota Fanning took the small role of Jane in order to prepare for her role as Cherie Currie in
The Runaways biopic, with her co-star Kristen Stewart. She later said that the role helped her to establish the relationship between the two in real-life and characters Cherrie and Joan Jett, which Fanning and Stewart play respectively.

Incorrectly regarded as goofs:
Since Carlisle has been a doctor for over 100 years, he could still have plastic syringes with metal cap needles for personal use at home.

Bella Swan:
It's one year older than you.

So BAD I find it funny


I've read all the books. I know what happens. This never ruins a film
for me.

I didn't want to see this film because the previous one was lacking
in… well… everything. But girlfriend wanted to see it. I went in
and was instantly surprised to see the demographic had widened past
12-16 year old girls who instantly swoon at any even remotely hot guy
so that was interesting. It's not relevant to how good the film was- it
just reaffirmed to me (and should to all of you) that hating a series
on principle or having preconceived notions of how bad something will
be is unfair on it.

Not in this case. It was still bad. BUT worth the money I payed to see
it because though it most definitely not intended to be entertaining in
the way I found it. It was full of melodramatic dialogue and bad acting
which, if you take ANY Drama classes at school- Which Robert DIDN'T-
you'll notice certain things about how people deliver lines. You notice
how they're SAYING lines they have memorised with unnatural and
stylised emphasis on the key words in the sentences without giving the
(cheesy) dialogue depth or realism. Quite simply, it was so terrible I
found myself resisting the urge to burst out laughing in a room full of
fans who were probably misinterpreting the melodrama as "Good,
emotional drama." No. This film is ridiculous.

As it goes further on it gets less tightly stitched together and I had
to become reliant on my knowledge of the books to fill in and pick up
the slight gaps in dialogue and plot. They would say things that are
based on something that didn't happen on screen (probably deleted scene
for time) or their dialogue would just be terrible unrealistic lines
that are work as standalone ones for a trailer but in conversation it
seems like they're jumping slightly just to get to say something that
is dramatic without it actually making too much sense.

BUT! It does have SOME redeeming qualities! The melodrama wasn't
nonstop hilarity so thankfully something else held my attention. There
was actual effort put into this film. The fight scenes actually used
REAL special effects (something the first film was a bit cheap on)
which actually looked kinda impressive. Any action was short lived
unfortunately but what little there was, they did a reasonable job
with.

I was impressed at the presence of transition. The previous film jumped
and skipped and the next plot point just WAS without having been
caused. This film (until near the end, of course) actually had a pace
and a coherency to it that allows you to understand it without reading
the books. This is a bonus. Certain things you'd think would drag on as
the director tries to give you time to let the "emotion" "sink in"
thankfully didn't take forever and the entire movie fit almost snuggly
into its 2 hour length. Too bad it fell apart more and more it went
along.

The film also shares the semi-awkward character interactions that
create the same humour as the first one. Not as deliberately funny as
the first one (though, as I said, it was pretty hilarious when it
wasn't meant to be) though.

Though it was many failings with only a few things to back it up as
being a reasonable film it will definitely make all you little teenage
girls out there desperate to see Jacob's hell tanked up body very
happy. You can HEAR the audience's reaction the first time Jacob takes
his shirt off. He's got all you need: Pecs, biceps, ABS OF STEEL and
minimal clothing. Too bad he lacks depth and real character. (Girls
love obsessively devoted Zombies, they don't think enough to complain)
It is NO WAY even NEAR one of the best films of 2009. NO ONE should say
this ridiculous claim.

Really tossing up between 3 and 4 stars. Mmm. I guess a movie's
highlight shouldn't be how low it sinks. 3.