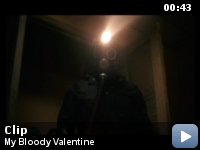 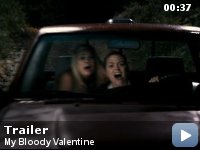 Tom returns to his hometown on the tenth anniversary of the Valentine's night massacre that claimed the lives of 22 people. Instead of a homecoming, however, Tom finds himself suspected of committing the murders, and it seems like his old flame is the only one will believes he's innocent.

Storyline
In the mining town of Harmony, a drilling accident is caused by the son of the owner, Tom Hanniger. The mine collapses, burying six miners alive. The rescue team finds only Harry Warden alive, but in coma, and the other miners murdered by his pickax, and they conclude that Harry killed them to save oxygen for himself. On Valentine's Day, Harry awakes from his coma in the local hospital, and he kills twenty-two people, including a group of teenagers that are partying in the mine. Harry is killed by the deputy, but the only survivors are Tom Hanniger, his girlfriend Sarah, their friend Axel Palmer and his girlfriend Irene. Ten years later, Tom returns to Harmony after the death of his father. Tom has decided to sell the Hanniger Mine, and finds that Sarah has married Axel, who is now the local sheriff, and they have a son named Noah. On Valentine's Day, Harry Warden also returns…

Taglines:
Are you ready for your heart to be broken? He's going to do it.

A flyer on a wall indicates that Valentine's Day is Saturday, February 14th. That would mean the previous day is Friday the 13th.

Factual errors:
Though the movie takes place in February in a coal-mining area of Pennsylvania, all the trees are in full, green foliage, as they would be in summer, instead of being bare.

Axel Palmer:
Hey, you missed me on TV.

Sarah Palmer:
Oh, yes! That's right! How was he?

Ben Foley:
When you gonna dump this bum and run away with me?

Sarah Palmer:
I get off work at 8.

Ben Foley:
Well, I'll be sure to tuck the top down the top on my Cadillac.


My Bloody Valentine 3D is one of those really rare kinds of horror
flicks. It delivers buckets of gore, brisk pacing, and a lot of in your
face 3D goodness. Sit close to the front of your theater for the
maximum effect (if you dare!). There is brutality in king size
portions, sure to satisfy the most hardcore of horror fans. They really
pull out all the stops with that pickaxe's of his.


Perhaps most importantly though, the production and marketing teams
were aware of what it what it was. At its core, its a cheesy mindless
slasher film, and rather than try to overcome this, My Bloody Valentine
acknowledges this trait and works with it. It owns it. Internet ads
bore slogans such as 'Its actually 4D if you're wasted.' Never does it
get bogged down trying to patch together an airtight story. It just
keeps its unrelenting pace up from start to finish, and delivers what
the audience came out to see, gratuitous violence.

A film like this is quite refreshing for the genre, not because it is
artful by any means, but because it embraces its inherent trashiness.
By deliberately failing to take itself seriously, My Bloody Valentine
becomes something more than the majority of its peers can ever be. It
becomes fun in the same way that a Poison concert or monster truck
rally is fun. Take my advice and see this thing as it was meant to be
seen, through beer goggles and a pair of cheap 3D glasses. Enjoy it for
what it is and don't worry about the second thoughts you might have
tomorrow morning.