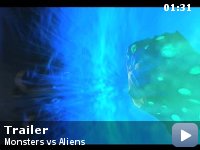 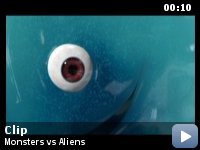 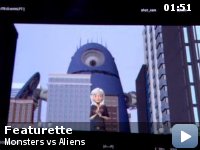 A woman transformed into a giant after she is struck by a meteorite on her wedding day becomes part of a team of monsters sent in by the U.S. government to defeat an alien mastermind trying to take over Earth.

Storyline
When a meteorite from outer space hits a young California woman named Susan Murphy and turns her into a giant monster, she is taken to a secret government compound where she meets a ragtag group of monsters also rounded up over the years. As a last resort, under the guidance of General W.R. Monger, on a desperate order from The President, the motley crew of Monsters is called into action to combat the aliens and save the world from imminent destruction!

Taglines:
Oooze gonna save us?

While the President bears a slight resemblance to Stephen Colbert, the character's look had been finalized some time before Colbert had even been cast for the part.

Continuity:
The hair on Link's chest disappeared in one scene and then reappeared later on.

Susan Murphy:
Oh, please, God, please tell me none of this is real. Please tell me I had a nervous breakdown at my wedding and I'm in a mental hospital and I'm on medication that's giving me hallucinations.


Let's get this out of the way first: I'm not a huge fan of DreamWorks
Animation. Usually consisting of nothing more than unfunny pop culture
gags, I think the majority of their films are mediocre at best, with
the only ones that I really enjoyed being the first Shrek and Kung Fu
Panda. The trailers for Monsters vs. Aliens did get me interested,
though, and the voice cast seemed pretty impressive. Even so, I was
still fairly skeptical about how it would finally turn out. Now, having
seen the film, I have to say that I was very pleasantly surprised.

There isn't a whole lot in the way of story and character development,
but suffice it to say, it serves its purpose. What makes Monsters vs.
Aliens such an enjoyable film is how it works as a comedy. The pop
culture references are still present, but I found them to be more
clever and funny this time around, and in much smaller amounts. I was
smiling through virtually the entire film, and had about 5 or 6 hard
laugh-out-loud moments throughout. As expected, I was also very
impressed by the voice cast in this movie. Hugh Laurie does a fantastic
job as the voice of the sophisticated (though mildly insane) Dr.
Cockroach, and most of the laughs are generated by Seth Rogen's
performance as B.O.B.. Even Reese Witherspoon helps you feel some
sympathy for her character near the beginning of the film, and Stephen
Colbert does a surprisingly solid job as President Hathaway.

The 3D, while not used as effectively as it was in Coraline, is still
one of the more impressive showcasings that I've seen, and that's
largely due to the film's incredible action sequences. Seriously, this
is some of the best action that I've seen in an animated film; as far
as I'm concerned, it's right up there with that of The Incredibles.

Overall, I found Monsters vs. Aliens to be a surprisingly entertaining
film, with clever and witty dialogue, as well as terrific action. I'm
not usually in favor of sequels, but if they're able to keep it as
balanced and charming, I would honestly like to see this become a
successful, long-running franchise. Nice job, folks at DreamWorks
Animation.

While She Was Out
Shinjuku Incident