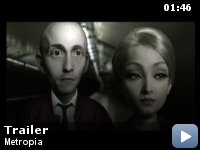 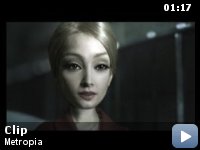 In the near future, oil reserves are nearly depleted and Europe is connected by series of underground tunnels…

Storyline
In the near future, oil reserves are nearly depleted and Europe is connected by series of underground tunnels. While navigating these tunnels, Roger hears voices, one in particular. Seeking a way to rid himself of the voice only leads Roger deeper into a bizarre conspiracy of control – mind and body.

Taglines:
Someone is listening to your thoughts

Continuity:
Just before the Hello Kitty bomb explodes, Selma the Fish is still on Stefan's desk in her tank. Roger had taken both fish and tank a few minutes earlier when he left.

Memorable visuals right up to the end; failure to generate suspense or build to a strong climax

Tarik Saleh, who made Metropia, is a Turkish graffiti artist living in
Sweden and who made an effective 2005 documentary on Guantanamo
interrogation techniques called Gitmo. Now he's turned to Orwellian
sci-fi, with nods to Kafka and Hitchcock. The opening text of his gray,
photo-realistic animated dystopia, which premiered at Venice and was
shown at the London Film Festival, reads: The end of the millennium
marked the end of many things. Natural resources dried up, the global
financial markets crashed and the crisis that connected the fate of all
people, still left the individual isolated in his ruin. It's 2024.
We're in Sweden. Oil has run out, hence the construction of "Metropia,"
a new pan-European subway system. This computer animated film is built
up out of actual photos using real people's faces and things.
Everything is somber and dark and murky and grayish blue, but hey, it's
Sweden; and there's a kind of beauty in the drabness, at least at
first; visuals are not the weak point of this film. Where it bogs down
is in its meandering and ultimately uninteresting plot.

Protagonist Robert (sensitively voiced by Vincent Gallo) is a dull
call-center worker whose expressionless face and big soulful Keane eyes
exude a preternatural calm; or is there massive Valium in the water
system? After Roger starts hearing Big Brother (actually Stellan
Skarsgard) talking in his head and responds by following pert,
tough-talking Nina (a cold, slinky-voiced Juliette Lewis), which leads
him into a meeting of gangsterish world leaders and their overlord,
Ivan Bahn (the naturally ghoulish Udo Kier), head of the Trexx
Corporation, which owns everything and is pushing an ominous (?)
shampoo, whose ads feature Nina. The in-your-head talkers turn out to
be nice lookalikes who take coffee breaks and have their own job
insecurities. But somebody is plotting with Nina. Yes, this is one of
those worlds where paranoia seems justified; but the dangers don't seem
very imminent. This computer-animated photo-based animated film starts
out promisingly and has an appealing (if transcendently drab) look with
memorable visuals right up to the end, but the nearly-comatose quality
of the main characters and the failure to generate suspense or build to
a strong climax leads to a ho-him final feel.

Seen as one of three features in the San Francisco Film Society's 4th
Annual Animation Festival in November 2009, this film was part of the
London Film Festival in October. Metropia has been nominated for
several prizes. It won the Future Film Digital Award at the Venice Film
Festival and is slated for theatrical release in Sweden December 27,
2009. It is a production of Atmo Films.