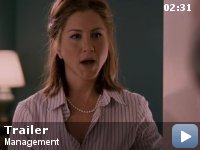 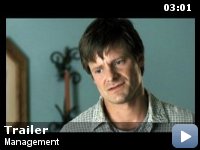 A traveling art saleswoman tries to shake off a flaky motel manager who falls for her and won't leave her alone.

Storyline
Mike works at his parents' motel in Kingman, population 27,000, on old Route 66. Sue sells art for a Baltimore firm to corporations for office walls. He takes one look at her from behind as she registers at the motel and determines to connect. He's sweet, but hapless, with no ambition other than spending time with her. She's enigmatic – rarely smiling, occasionally impulsive, committed to helping homeless people, feeling the clock tick after a breakup with a boyfriend who could have provided security. Is there any way he stands a chance with her? What can he offer?

A Catholic priest in Portland, Oregon, received an invitation to read for a scene involving a priest, while filming occurred in that city. A Portland-based member of the casting department told him that writer/director Stephen Belber was unsatisfied with the readings and characterizations that auditioning actors had been giving for the very brief lines in the scene. The casting department told the priest they found him through a random Internet search, yet he happened to be a serious film buff (for instance, he has an IMDb account). He had even hoped that someday he might get a bit part as a priest in a film. But he declined the invitation to read for the part in
Management, after seeing the script of the scene in question and learning more about the film's storyline and about some of its other content. A modified version of the scene – without a priest – is in the film.

Audio/visual unsynchronized:
In the hotelroom is a wine offered as hotel-present. The bottle of white wine (which is drunk without any cooling) is almost empty after only two little glasses.

Mike:
Take care of yourself a little… so that the people who love you don't feel like they're annoying you!


Sure if someone has hot as Jennifer Aniston were to offer you to touch
their butt, I'm sure almost every male out there would jump at the
chance of doing so without thinking twice. It's a no brainer offer, and
a teaser of course to a larger, more sentimental story out there about
the relentless pursuit of love, the romanticism attached to wanting to
be with someone, without being consciously bogged by the harsh
realities of life and survival. With affairs of the heart, to me at
least it's a seizing of opportunities presented, rather than to adopt
the wait and see approach.

The hook for the film, written and directed by Stephen Belber, is of
course that much talked about scene between Aniston and Steve Zahn, the
former being Sue, an art saleswoman who on a business trip had stayed
at a motel, which Zahn's Mike is the night manager of his family's
business. Smitten by none other than her buttocks, Mike crafts simple
yet really strange excuses just to be close to Sue and talk to her, and
the initial scenes which they share in her hotel room, is something
that both actors brought out superbly – the awkwardness, the
suspicions, and that hopeful look that something good might arise from
all of the nonsense.

Thus began Mike's obsession with Sue when she allowed him that grace to
fulfill a fantasy, and that translated to the borderline of stalking,
where he dumps everything, and pursues her across state lines. Turning
up at someone's workplace unannounced can have a very chilling effect,
especially when one is only nothing more than an acquaintance and a
one- nighter, to pass time and in an attempt to claw out of loneliness.
After all, anything else is better than being holed up in your hotel
room playing Solitaire on a computer.

Management is pretty much about the idealistic and pragmatic lenses
that we wear from time to time in our view of romantic relationships.
Here, it's a Mr Idealistic versus Ms Pragmatic in the approach. In
Mike, we see someone with a hope of going beyond his comfort zone of
his parents' business, in the pursuit of a romance that he only wishes
to turn out positively. There's no plan, there's no ulterior motive,
there's only the want to be with someone and spend time with her, pure
and simple. Heck he doesn't even have enough money to begin with.

For Ms Pragmatic, it's all about the plan, where such a situation will
lead to, Complications arrive through the introduction of her
ex-boyfriend Jango (Woody Harrelson), an ex-punk band member who is now
an established businessman. This means a nobody Mike is against a
somebody Jango, and presents a choice for Sue to choose – the one for
that undying romance, or the one who can pay the bills and allow her to
continue hiding behind charitable causes to coast through life without
spontaneity that the former may bring. It's a matter of love for
genuine love of a person, or a love that is a matter of convenience and
timing, which in itself is truly sad because you know that there's a
compromise, which may not be for the better.

The film also went beyond the usual romantic elements, and tried
successfully to insert other aspects of relationships such as family
(Mike's Mom and Dad played by Margo Martindale and Fred Ward
respectively), and friends. The role of Al (James Hiroyuki Liao) as
Mike's best friend was curiously interesting as well, as here's an
almost mirrored character in having a waiter working in his parents'
restaurant business too. Despite being present only in the middle act,
Al's role served as comedic fodder, and to catalyze that life changing
idea for Mike in learning to let go, but never forgetting.

In many ways, the character of Mike had reminded me of a younger self
where caution is thrown to the wind with the chasing of skirts, in the
same way zoning on that singular tree while forsaking the forest, never
mind the issues of incompatibility that loomed in the horizon. Not a
very wise move of course on hindsight, but given the intoxicating
passionate nature then, I suppose that was that. Naturally between then
and now I had realized that there had been irreversible change in our
characters probably, and the ones in the past vaguely seem like distant
characters who only remotely resemble who they are now.

But Management somehow was more hopeful and optimistic in nature, and I
suppose that suited the movie just fine, bringing you through the
stages of passionate infatuation to love through the power of naive
sincerity. With an excellent selection of songs in its soundtrack,
Management may just end up as a surprise when I compile my top 10 list
for the year. For those who are looking for that little extra in a
romantic comedy, then Management may just be that little gem which will
set you thinking.

TagsUSA
Antichrist
Night at the Museum: Battle of the Smithsonian