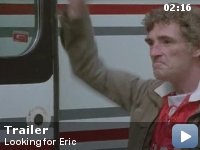 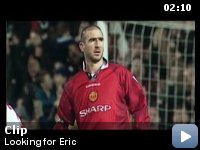 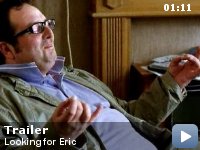 Eric, a football fanatic postman whose life is descending into crisis, receives some life coaching from the famously philosophical Eric Cantona.

Storyline
Eric Bishop, a middle-aged postman working for the Manchester sorting office, is going through a dreadful crisis. For starters, his second life companion has not resurfaced although she was released from prison a few months ago. He is left alone with two stepsons to look after, which is no bed of roses since the two teens disrespect him and keep disobeying him. To make matters worse, Ryan, the older boy, fascinated by Zac, a dangerous gangster, has accepted to hide his gun in Eric's house. On the other hand, he is asked by Sam, his student daughter who has a newborn baby,to get back in touch with Lily, his separated wife. Now, Eric left her not long after she gave back to their daughter. As a result Eric panics… Having lost all his bearings, Eric Bishop soliloquizes face to the poster of his idol, another Eric, French footballer Eric Cantona, when the latter appears just like the genie out of Aladdin's lamp…

Taglines:
To win back the love of his life, Eric's going to need a little training.

John Henshaw, who plays a postal worker, is also one of the faces of the national Post Office in the UK.

Continuity:
On the bus going to the raid, the clock reports 12:12. Then, the camera goes on the passengers. When back on the bus clock, it reports 12:38.

It score's with me …


I think that Ken Loach has produced another winner here – it is a story
of a Eric Bishop (Steve Evets), a postman going though some hard times
and not being able to cope with life in general – with a painful
break-up behind him, a dysfunctional home life, step kids that ignore
him, he decides to escape from it all by driving the wrong way around a
round-about … this prompts his friends to rally around to help him –
suggesting self help techniques (very comical!) and adopting role
models … and Eric B. adopts his main influence as Eric Cantona – who in
his mind's eye becomes our Eric's life coach and mentor


Eric's friends and work colleagues from the Post Office are hilarious
and whenever they are on screen it is very funny – especially the
character "Meatballs" – played with great aplomb by John Henshaw. Other
very good performances were portrayed by Stephanie Bishop (as Lily) and
of course by Eric Cantona playing himself …

Just when it seemed all was lost for Eric B. and his family – there is
then a superb twist in the plot (I won't give it away here) – and you
won't see it coming! – that leads to a very fitting, uplifting finale
to a very well told / acted / directed story I am not a Man Utd. Fan,
but this film still has a lot to recommend it – and I must say, that
Eric Cantona grows on you more and more as the movie goes along

This film's message is not really about football – it's more about the
value of friends and people you can rely on when all seems lost … and
as Cantona states "Trust your teammates – always – or your are
nothing!"

I found "Looking for Eric" to be a very enjoyable film – recommended!

TagsEngland UK
Night at the Museum: Battle of the Smithsonian
Mother