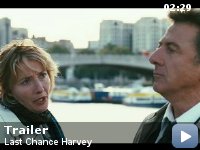 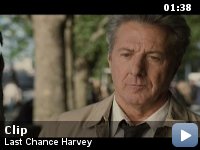 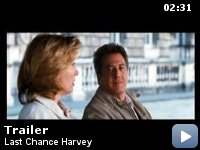 In London for his daughter's wedding, a rumpled man finds his romantic spirits lifted by a new woman in his life.

Storyline
Harvey Shine is in London for the weekend for his daughter's wedding. His work in New York preoccupies him: he writes music for ads, and he knows his boss is pushing him aside for younger talent. With family he's also on the sidelines – long divorced, his wife remarried, her husband closer to his daughter than he. His path crosses that of Kate Walker, unmarried, her life becoming that of a spinster, set up by friends on blind dates leading nowhere. After Harvey's no good terrible day, he chats Kate up at a Heathrow bar. She's not interested. Where can this conversation lead? Back at his daughter's reception, the step-father rises to give a toast.

Taglines:
It's about first loves, last chances and everything in between.

Emma Thompson and Dustin Hoffman worked so well together in 'Stranger Than Fiction (2006)', they wanted to do another project together and got involved in "Last Chance Harvey".

Incorrectly regarded as goofs:
During the wedding ceremony scene, Harvey's daughter is wearing a very casual beige dress, but later at the reception she is wearing a formal beaded wedding gown with ornaments in her hair. However, this is a common practice in British weddings: for each event the dress gets more formal.

Kate Walker:
I think I'm more comfortable with being disappointed. I think I'm angry at you for trying to take that away.


This movie is about a socially awkward American man and British woman
who meet in London, get to like one another and may have a future
together. The plot has been done a zillion times. I pretty much knew
what was going to happen twenty minutes into the film. What saves the
film from being one huge predictable snooze fest is that the author is
clever enough not to fall into too many clichés so things seem possible
if not probable. And there is the excellent casting of Dustin Hoffman
and Emma Thompson. Their characters are quirky enough to be believable
and both are very sympathetic. And there's no silly Hollywood ending
with rockets bursting and doves flying into the sunset. There's a
chance they might make it as a couple despite differences in age,
culture and countries or they might be in for a huge disappointment and
hurt–something both have known in their lives.


If you're expecting a movie that will entertain, be free of gratuitous
sex scenes and violence with a charming backdrop of London landmarks,
then this film is for you.