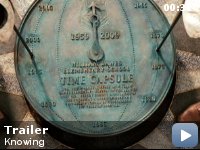 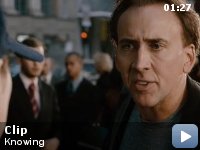 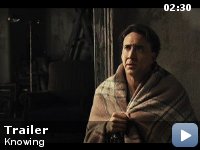 A teacher opens a time capsule that has been dug up at his son's elementary school; in it are some chilling predictions — some that have already occurred and others that are about to — that lead him to believe his family plays a role in the events that are about to unfold.

Storyline
In the fall of 1959, for a time capsule, students draw pictures of life as they imagine it will be in 50 years. Lucinda, an odd child who hears voices, swiftly writes a long string of numbers. In 2009, the capsule is opened; student Caleb Koestler gets Lucinda's "drawing" and his father John, an astrophysicist and grieving widower, takes a look. He discovers dates of disasters over the past 50 years with the number who died. Three dates remain, all coming soon. He investigates, learns of Lucinda, and looks for her family. He fears for his son, who's started to hear voices and who is visited by a silent stranger who shows him a vision of fire and destruction. What's going on?

Taglines:
What Happens When The Numbers Run Out?

The piece of classical music we hear at the start and again at the very end of the film is Ludwig van Beethoven's "7th Symphony Major, 2nd Movement – Allegretto in A Minor". Completed in 1812 and dedicated to his friend Count Moritz von Fries, the work premiered in Vienna at a charity concert for soldiers wounded in the Battle of Hanau and was encored.

Factual errors:
When John first sees the pattern on the paper, it is the 0911012996 that catches his eye. This would be incorrect because 2,996 was the total deaths on September 11 from all 3 locations (New York, Pentagon, and United 93) yet the paper gives GPS coordinates for individual locations.

Miss Taylor:
Everyone inside now!

I can't believe people are calling this the "best SF movie of the
year", unless there aren't any other SF movies this year. Ebert
obviously needs to adjust his meds if he gave this four stars.

Plot holes? Plot holes? The rocks… do they mean *anything*? How come
the aliens can't find *some* way to communicate with people? How do
they expect to leave their numeric clue hidden for 50 years and have
just the right person run across them? Why does the son get all bent
about being treated as a child… for 30 seconds? My God — it's full
of holes! This abomination makes Swiss cheese look like battleship
armor.

"Thought-provoking" only in the sense that if you start thinking about
it, you'll be astounded at how little sense in makes, and how much
thinking you have to do to force any of it to work.

I've been reading science fiction for 30 years. I know SF. SF is a
friend of mine. And if this is the best SF movie of the year, I'm a
monkey's uncle. And aunt. And male offspring. And second cousin once
removed.

TagsAustralia
Coco
While She Was Out