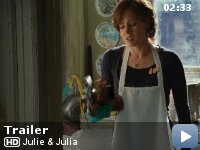 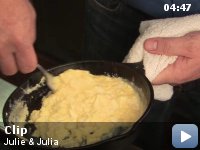 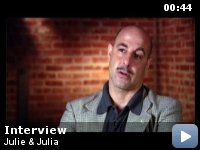 Julia Child's story of her start in the cooking profession is intertwined with blogger Julie Powell's 2002 challenge to cook all the recipes in Child's first book.

Storyline
Julia Child and Julie Powell – both of whom wrote memoirs – find their lives intertwined. Though separated by time and space, both women are at loose ends… until they discover that with the right combination of passion, fearlessness and butter, anything is possible.

Taglines:
Based on Two True Stories

Julia Prud'homme, who plays the bridge teacher in the film, is Julia Child's grand-niece.

Continuity:
(At 1:30) When Julie (Amy Adams) is talking to Sarah (Mary Lynn Rajskub) in a bar. In the first shot we see, through the window, Julie leaning her left elbow on the counter, holding a drink in her left hand. In the next shot, Julie leans with her right elbow on the counter, holding that drink in her right hand. The dialogue is continuous between these shots, so there's no question of time elapsed and for these two women to have swapped places at the bar.

Delightful Instant Classic. I Laughed. I Cried. But "Julie" Part a Bit Weak.


The good parts of "Julie and Julia" are so darn strong, beautiful, and
new that J&J becomes an instant classic. Grateful audiences are going
to be laughing and crying and being inspired by this movie for a long,
long time. The Julie portion is the weaker of the two, but not so weak
that it sinks the film.


Meryl Streep as Julia Child is one of the most endearing, arresting
performances ever. That the real Julia Child and her groupies irritate
me no end in no way interfered with my appreciation of Streep's amazing
characterization. I laughed and cried several times, I was so engaged
in the cinematic Streep/Child's story.

Streep's chemistry with Stanley Tucci as Paul Child, Julia's husband,
is breathtaking. No attempt is made to make Streep or Tucci
conventionally attractive. No attempt is made to make them look young
and dewy – they weren't – Julia married Paul when she was in her
thirties and he was ten years older. Julia is tall; Paul is short;
Julia is loud; Paul is bald, quiet and retiring. It is implied that
they can't have children. They don't share conventionally romantic
movie moments; they don't "meet cute," there's no candlelight, no slow
dances, no full frontal nudity, no vulgar language (with one hilarious
exception involving cannelloni).

All Paul and Julia do is share the drudgery and rewards of working
life: hers as a cook, his as a state department official. The key to
Streep and Tucci's chemistry is that they portray two characters who
love each other. Watching a loving, married couple in a marriage that
works is one of the great, and sadly rare, pleasures of this film.
Steep and Tucci are every bit as charismatic a couple as Tracy and
Hepburn. Jane Lynch is also brilliant in a small role as Julia's
sister.

The Julia segments take place in post-war Paris, and the Paris of this
film, one of elegant cafes, haute couture and vintage cars, is
someplace we all wished we lived (except for the ever-present cigarette
smoke.) No matter how you feel about cooking, the film gets you to care
about Julia's slowly being drawn into her destiny as one of the
legendary chefs of all time. You also care about, and respect, Paul,
his career and its ups and downs in the McCarthy era, and his support
of his wife.

The Julie Powell portion of the movie is the weaker portion. I really
like the film's structure of switching back and forth between
contemporary Queens and post-war Paris, contrasting a career woman's
attempt to cook all of Julia Child's recipes with Julia Child herself,
before she became famous. I just think that the film fails its own
structure by simply not making the Julie Powell portion as interesting
as the Julia Child portion. Some have complained that Queens is
depicted as being too dismal, and Paris too elegant. It's more than
that, though.

I think Ephron, a brilliant filmmaker, drops the ball with Julie Powell
because she never engages the tough questions about Powell's
experiment. Was Powell just someone eager for fame in the Warhol era of
"Everyone is famous for fifteen minutes"? Was Powell parasitizing
Child's fame? Was Powell a bad wife to her husband as she obsessed on
completing her self assigned task? Have blogs killed quality writing?
Was Julia Child correct in her condemnation of Powell? I am not saying
that the answer to any of the above questions is "Yes." I'm not bashing
Julie Powell. I'm saying that by not engaging them, Ephron made the
Julie portion of the film simply not as interesting as it could have
been had these very real questions been engaged. Instead, Ephron tries
to turn Julie into a cute, bland Meg Ryan character, and it never
works, not for an instant. When Powell has lunch with her career gal
friends, her friends are such Gordon Gecko style sharks that we care
less for Powell for being so needy as to want to impress them. The
absolute worst scene in the movie comes when Powell, who has never been
depicted as feeling happy or fulfilled, not with her job, not with her
husband, not with her home life, plays 65 answering machine messages
from agents, editors, and publishers who want to make her famous. As
these messages play, she has sex with her husband, and her husband's
comment lets us know that this is the first time in a long while that
he has experienced satisfaction from his wife.

The message of that scene is so tawdry, it cheapens the glow created by
the Julia portion of the film, that shows Julia Child achieving
satisfaction *before she ever becomes famous*. Julia *loved* cooking.
Julia *loved* her husband. Yes, she celebrates when Knopf wants to
publish her book, but she is so divorced from the rat race that she
doesn't even know how to pronounced "Knopf" – whether the initial K is
silent.

Julie Powell is depicted as needing fame to feel good about herself,
and the movie never interrogates that. Had it done so, the Julie
segments would have been as interesting as the Julia ones.

In any case, this is a great film that will enjoy a much deserved
embrace by its fans.