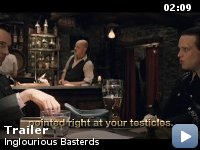 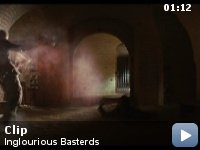 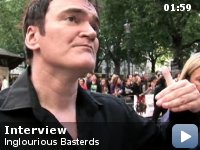 In Nazi-occupied France during World War II, a group of Jewish-American soldiers known as "The Basterds" are chosen specifically to spread fear throughout the Third Reich by scalping and brutally killing Nazis.

Storyline
In Nazi occupied France, young Jewish refugee Shosanna Dreyfus witnesses the slaughter of her family by Colonel Hans Landa. Narrowly escaping with her life, she plots her revenge several years later when German war hero Fredrick Zoller takes a rapid interest in her and arranges an illustrious movie premiere at the theater she now runs. With the promise of every major Nazi officer in attendance, the event catches the attention of the "Basterds", a group of Jewish-American guerilla soldiers led by the ruthless Lt. Aldo Raine. As the relentless executioners advance and the conspiring young girl's plans are set in motion, their paths will cross for a fateful evening that will shake the very annals of history.

Taglines:
Diane Kruger Is A Basterd

Director Trademark:
[Quentin Tarantino]
[victim's viewpoint]
Tarantino's trademark shot of actors from a trunk or engine compartment is replaced by shots from the viewpoint of post swastika-scarred victims.

Anachronisms:
In the opening scenes at the farmhouse, it can be clearly seen that the fields have been farmed using mechanized farm equipment – the crop marks from spraying from tractors, for instance. Rural France before the 1960s in general and during the war in particular, was not mechanized in any meaningful way until an influx of wealth from Great Britain and Germany via the Common Agricultural Policy of the Common Market/European Community/European Union. It would all have been horse drawn or manual.

Col. Hans Landa:
Gentlemen, I have no intention of killing Hitler and killing Goebbels and killing Göring and killing Bormann, not to mention winning the war single-handedly for the Allies, only later to find myself standing before a Jewish tribunal. If you want to win the war, tonight;
[Landa lightly chops his lands down against the table]

Col. Hans Landa:
…we have to make a deal.

Col. Hans Landa:
The kind you wouldn't have the authority to make. However, I'm sure this mission of yours has a commanding officer. A general. I'm betting for… OSS would be my guess.

After watching Inglorious Basterds i was really surprised when i saw
ratings on IMDb. Didn't expected high ratings and top 250 place. If we
can only isolate and rate Christoph Waltz's acting performance i would
agree that this movie deserves 10. But he is not alone, and his
performance can't cover horrible plot, boring conversations, unfunny
characters, alternative QT WW2 fantasy and Eli Roth as Jew bear.


The opening scene with Denis Menochet as farmer and Christoph Waltz as
SS officer is best part of the movie. Only part that have same quality
and connects tension from that scene with the rest of the movie is a
basement scene. Basement scene was crossroad for me. Michael Fassbender
was great in role of British spy and his character adds some new layer
of logic and realism in movie. In moments you can actually see some
plot finally breaking through the rubbish you watched after the farm
scene. After the basement chapter, movie is going nowhere.

Empty space. A lot of empty space for movie that last 153 minutes. Long
and boring scenes with boring characters and conversations. Childish
fantasy mixed up with Spaghetti western movies and some atmosphere that
don't belong to WW2 period. Thats why we have basterds to fill
everything else and patch the rest of movie. They failed. Basterds are
weakest/undeveloped and most boring part of movie. Movie is named by
them, yes – Brad is on Movie poster … but they are horrible. Worst
role of Mr Pitt and i hope last one from Eli Roth.

Beside 2 good scenes, i really enjoyed listening smooth gradient of
German, French and English language. But again, this is connected to
Waltz and Fassbender and their personal knowledge that Tarantino used
for his fantasy.

Inglorious Basterds is Hybrid movie where gangsters are replaced with
Nazis adding them wild west background layer with Brad Pitt on movie
poster just to sell tickets. It doesn't work in this case.

5/10 – only for Christoph Waltz and Michael Fassbender.