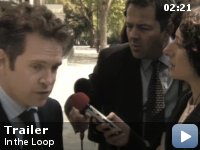 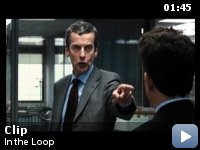 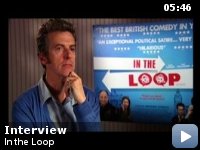 The US President and UK Prime Minister fancy a war. But not everyone agrees that war is a good thing…

Storyline
The US President and UK Prime Minister fancy a war. But not everyone agrees that war is a good thing. The US General Miller doesn't think so and neither does the British Secretary of State for International Development, Simon Foster. But, after Simon accidentally backs military action on TV, he suddenly has a lot of friends in Washington, DC. If Simon can get in with the right DC people, if his entourage of one can sleep with the right intern, and if they can both stop the Prime Minister's chief spin-doctor Malcolm Tucker rigging the vote at the UN, they can halt the war. If they don't… well, they can always sack their Director of Communications Judy, who they never liked anyway and who's back home dealing with voters with blocked drains and a man who's angry about a collapsing wall.

Taglines:
The fate of the world is on the line.

Prior to filming, Armando Iannucci gained access to the US Department of State by flashing a simple photo ID to a security guard and saying "BBC. I'm here for the 12:30." He then spent a few hours walking around taking pictures for his set designers. The meeting in which General Miller is stood up by Linton Barwick was also scheduled for 12:30.

Continuity:
In the scene where Malcolm is walking outside the White House talking on the phone, he walks a segment from a light pole to a police car with very few people around. However, when Judy hangs up and the camera switches to face the fat man, Malcolm is back in the first light pole and the place is suddenly crowded. Then the camera turns around and shows the police car ahead which is now surrounded by a group of people on Segways.

Get In the Loop


Is it a work of fictional farce or an insightful view of the members of
the governmental bureaucracy? Probably in truth, In The Loop is a
little bit of both, but more so its a whole lot of fun at the
governments expense. There have been numerous films over the years
giving us insight into how our government works, at times it sure looks
bleak and unjust, but we sure haven't seen it in such a ridiculous
view. In The Loop aims at making sure they scrutinize the bureaucratic
desk jocks for all their worth. The film follows the Minister of
International Development (Tom Hollander) after he has put his foot in
his mouth, unintentionally announcing that war is unforeseeable. Back
tracking and word-smith manipulations prove mute, fortunately for the
Minister he's got big fans in the US who would like nothing more then
to use the naive Brit in their political posturing. The hawks begin
circling and before the Minister knows what game he's playing he's into
deep and merely a puppet in the political theater.

There is a hint of a serious political thriller in the plot here, but
In The Loop knows we've seen all that before so why not have a little
fun, actually why not have a whole lot of fun and throw in lots of
scalding four letter words and absolute British wit. Tom Hollander as
the Minister of I.D. is dumb-foundingly perfect in his role and is well
complemented by his bungling assistant Oliver (played exceptionally by
Chris Addison). As the Director of Communications, Peter Capaldi steals
the show with his relentlessly scathing superhuman vulgarity ridden
wit. Those with a distaste for such colorful language should look
elsewhere as their ears will certainly be on fire if they can last
through a third of the film. Personally the language was not a problem
for me, I appreciate a master of the finer words, and Capaldi has shown
himself to deliver his lines with such craftsmanship that sailors
around the world will be put to shame.

The Brits are a fantastic mess, but of course what international mess
would be complete without the United States Govt.. And so comes the
behemoth know as James Gandolifini, the Don Capo hasn't lost any of his
on-screen presence. As the ol' war vet Pentagon General, Gandolfini is
gruff and verbally abusive in a really mean spirited way, which is
glorious. Those with a keen sense of cinema will notice how well the
film shifts humor as the Brits come across the pond to the the dry
humor of America. Gandolfini makes the most of his screen time, but on
the American side the majority of the ridiculousness comes from Mimi
Kennedy, as the Assistant Secretary of Diplomacy and her bickering 20
something Capital Hill brown nosing assistants. Director Armando
Ianucci's delivers such a cynical sharp witted look at all things
politically ridiculous and it works on so many levels. Fans of British
humor will love this, its pureness to the form is perfectly meshed into
the political platform that moves the comedy along with merely a few
small bumps in the road. On the other side of the coin, those who enjoy
making fun of those of the diplomatic persuasion will delight in the
roasting of our governmental members.