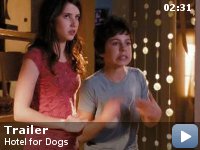 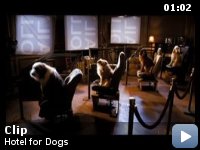 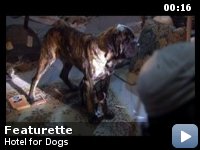 Storyline
Animals are strictly forbidden at Andi and her little brother Bruce's foster home. But for Friday, the adorable dog they secretly care for, they're ready to risk everything. They finally find him an ideal shelter, a huge abandoned hotel that Bruce transforms thanks to his engineering genius. In what has become an incredible paradise for dogs, Friday is soon joined by all kinds of furry friends, so many in fact that their barks alert the neighbors…and the local pound, who can't understand the disappearance of all the stray dogs. Andi and Bruce will have to call on all their friends and all their imagination to stop the hotel's secret from being discovered.

Taglines:
Who let the dogs in?

The dogs were amusing, the people less so


I saw a preview of this film with kids 6, 7 and 12. We are a dog-loving
family, so perhaps we were biased to enjoy the film. That said, we were
split on our review. The adults and 12 year old were bored; the two
youngsters were thrilled! Hence the score of 6.


Overall, this was a harmless movie featuring a few humans and many
trained dogs. It was sugary and nice – there was no real threat
anywhere in the film of something bad happening (thus it is kid-safe
for very young kids). And they've reduced the idea of foster homes down
to a concocted McNugget of a concept. My younger kids didn't even
follow that theme at all.

What they did follow, and what I found most redeeming, were the
numerous cutesy dog tricks and toys. The creators of the film did a
nice job inventing clever ways to mechanize the caring for dogs (think
the breakfast scene in Chitty Chitty Bang Bang). That was fun. And the
dogs were cute.

For me the drawbacks were these: Slow start, unfunny 'comic' characters
– like the foster parents and dog catchers, and a lame plot.

But ultimately – we had a nice outing, and you will too. And you will
emerge from the film MORE likely to go get a dog of your own.