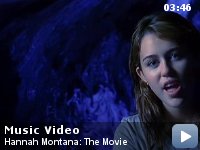 As Hannah Montana's popularity begins to take over her life, Miley Stewart, on the urging from her father takes a trip to her hometown of Crowley Corners, Tennessee to get some perspective on what matters in life the most.

Storyline
As Hannah Montana's popularity begins to take over her life, Miley Stewart, on the urging from her father takes a trip to her hometown of Crowley Corners, Tennessee to get some perspective on what matters in life the most.

Taglines:
She has the best of both worlds… now, she has to pick just one.

With $17.4 mil, had the best opening-day gross for a live-action G-rated movie ever.

Revealing mistakes:
Near the beginning when Miley is leaving gym class and stops at her locker you can see her pull it open a little and the fiddles with the lock, as it unlocking it. But if it was really locked to begin with it wouldn't have opened at all.

Robby Ray Stewart:
You got in a shoe fight!

Hannah Montana:
Daddy, don't do this.

Hannah Montana:
So you're saying I can never be Hannah again?

Miley Cyrus is like a vermin in the Western World

The incredible lack of quality in this film is not only intensified by
Miley Cyrus' lack of acting or singing skills, it is aggravated as the
entire movie resolves around her own "inner struggle"(huh). She is
incapable of delivering her lines with any sort of credibility or
patience whatsoever and has to rely on being loud and intense in order
to keep people's attention. That showcasts how her on-screen persona is
similar to her on-stage persona: In order to hide her obvious flaws in
talent, simply distracting the fandom (teenage girls usually between 6
and 13) with over exaggerated moves and expressions tends to do the
trick. Some people might call that "Being relatable" or "Having a stage
presence", I call that a plot to remain in the spotlight of 10 year old
girls (All while failing at "overgrowing her character" by dating a 21
year old underwear model and uploading half naked pictures of herself
in real life).

Billy Ray Cyrus, on the other hand, is the complete opposite of his
daughter. Instead of overstating every single line and facial
expression, he barely manages to pull them off with disdain. I swear to
you, his repertory of expressions and emotions is even smaller than the
list of his musical hits.

The screenplay is just what one would expect from a Disney Channel
movie. You will not find a "Finding Nemo" or a "Wall-E" on this one,
just a simple "sweet tale" about a character struggling while finding
young love (Except that it fails at that too, given not only that the
main characters do not last together for long and that on the show the
Miley Stewart/Hannah Montana character changes boyfriends as fast as
she changes tampons). The love interest is so disgustingly clichéd that
you might just laugh at his fakeness. The jokes, as expected coming
from a Hannah Montana movie, are simply not funny at all.

In fact, the entire movie gets so lame and predictable that it becomes
yet another proof of how -for everyone's sake- Disney Channel's writers
are ought to commit suicide.

Now on the music (Or lack thereof). The soundtrack is just what would
be expected by Hannah Montana: songs filled with self-references and
childish squabble. Although it meets its purpose of making small
children happy, it is nothing more than that.

The movie includes a ridiculous Macarena wannabe "dance song" which is
so incredibly complex that not even her fandom will replicate it
without a severe amount of effort (Were they actually expecting people
to dance the Howdown whatever? It's not like its simple, or easy for
that matter).

Miley Cyrus and her dad are simply not talented at all in the musical
arena. The only song worth saving from this whole mess is The Climb,
which is actually deep and thought provoking.

If you are not a tormented parent who is being absolutely threatened by
his daughter to go see this film with her, I implore you for your own
sake, take that money elsewhere and save yourself the nuisance. Because
in the end that is the only thing this is.

TagsUSA
The Fish Child
In the Electric Mist