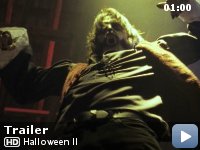 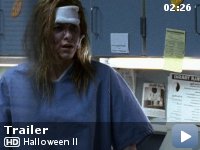 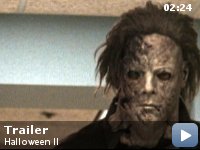 Laurie Strode struggles to come to terms with her brother Michael's deadly return to Haddonfield, Illinois; meanwhile, Michael prepares for another reunion with his sister.

Storyline
Michael Myers is still at large and no less dangerous than ever. After a failed reunion to reach his baby sister at their old home, Laurie Strode is immediately taken to a hospital to be treated by the wounds that had been afflicted by her brother a few hours ago. However, Michael isn't too far off and will continue his murdering 'Halloween' rampage until he gets his sister all to himself.

Taglines:
You can run. You can hide. Or, you can fight… LIKE HELL.

Crew or equipment visible:
When Coroner Hooks and Gary Scott have a car accident, you can pause a few frames before the crash, and clearly see that a small explosive detonates in-front of the bumper before they hit the cow.

Weird Al Yankovic:
I'm a little confused. Are we talking about the "Austin Powers" Mike Myers or is this someone else?

Attack of the Killer Dream-Sequences


Rob Zombie should have named his latest film "Kill-****ing-Everything,"
as it would have given audiences a better idea as to what to expect
when paying for a ticket. It also would've been a signal not to expect
any shred of respectability that Zombie was able to retain in his first
film. Unlike the first film, which was at least intriguing if not good,
Zombie relies on every horror-cliché imaginable in order to
unnecessarily pad the run time and the body count under the misguided
belief that greatness is measured in terms of sheer brutality.


Zombie must have decided that audiences needed an even greater reason
to hate the main character after he turned her into a typically
annoying teenage tramp in the first installment. As a result, Laurie
has become a crust-punk vegetarian, no doubt altered by the events that
transpired a year earlier. She has continuously suffered from
nightmares and delusions since that fateful Halloween, and the audience
is reminded of this every five minutes by dream sequences that litter
the first half of the film. Meanwhile, Michael Myers has indeed
survived the first film and is on a three day trek back to Haddonfield,
killing any form of life that he encounters along the way. His arrival
is precipitated by numerous red herrings in the form of dream
sequences, and this back-and-forth pattern is continued throughout the
film until he actually arrives and continues his habit of killing
everything in sight.

In order to add another layer to a rather straight-forward plot, an
examination of post-traumatic stress is included, as Laurie is shown
coping with her life after it had been shattered the year before. This
remains the greatest aspect of the film, as Laurie's battle, even with
the saturation of unnecessary dream sequences, is a gateway for
audience sympathy. Apparently not satisfied with this connection,
Zombie also attempts an examination of Michael Myers's psyche, despite
the perfect serial-killer development of the first film. This new
examination centers on the dream interpretation of a white horse, which
Michael constantly envisions alongside his deceased mother. In his
visions, he is depicted as a child, and his mother instructs him to
unite their family once again (meaning that he has to find Laurie).

In essence, Michael is instructed by his dead mother to kill, a blatant
connection with the original Friday the 13th series that would have
been impossible to have gone unnoticed by Zombie. These visions of
Michael's are also the main contributors as to why the film is a
convoluted mess. The constant appearances of the white horse motif are
meant as an explanation for Michael's behavior, but they instead become
a hindrance to the flow of the film. In addition, his insistence to
kill everything he encounters is unexplained by his mother's desire to
reunite the family, save for a brief instance in which his mother
invites him to "have some fun." Of course, murdering everything in
sight is the nature of the Michael Myers character, but as Zombie has
focused on mental disease rather than the supernatural in his Halloween
series, the new serial killer persona remains an insufficient
justification.

By avoiding any supernatural aspect, Zombie also fails to sufficiently
explain certain events in the film. It is never mentioned how Myers was
able to survive a gunshot to the face without hospitalization, nor is
it explained why it takes a year for Michael to return to Haddonfield.
It is vaguely mentioned that the police misplaced the body in transport
from the crime scene to the morgue (which is depicted in a scene that
is dismissed as a dream of Laurie's), but this appears to have occurred
in the outskirts of town. The delusions that Michael suffers are also
shared by Laurie in the film's climax, which, barring any supernatural
connection, simply doesn't make any sense.

Finally, in what may be the most unforgivable aspect of all, Zombie
completes his transformation of Dr. Loomis from the beloved, heroic,
and selfless figure of the first series to an arrogant, self-centered
egotist. Loomis serves no function in Halloween II other than to inform
Laurie that she is Michael's sister. Other than this development, he is
meant as a spiteful center of rage that the audience is led to hate
more than Myers, and as a result, his inclusion in the film is almost
useless.

In between scenes of Laurie's breakdown, Michael's visions, and
Loomis's asinine ego-trips, Zombie manages to saturate the remaining
run time with close-ups of excessively gory wounds, unattractive bodily
features, and every squishy sound imaginable. Zombie has never been
subtle with his depiction of the macabre and grotesque, but in this
film, it is so excessive that it becomes apparent that he isn't
interested in any serious, albeit fictional, examination of mental
illness. Rather, he seems more focused on making the audience ill. For
seedy exploitation films of yesteryear, this is a perfect combination.
In mainstream cinema, however, it has become a tired cliché that ran
its course in the eighties.