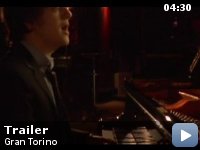 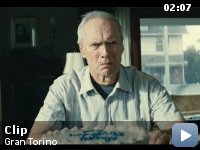 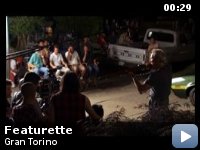 Storyline
Walt Kowalski is a widower who holds onto his prejudices despite the changes in his Michigan neighborhood and the world around him. Kowalski is a grumpy, tough-minded, unhappy an old man, who can't get along with either his kids or his neighbors, a Korean War veteran whose prize possession is a 1972 Gran Torino he keeps in mint condition. When his neighbor Thao, a young Hmong teenager under pressure from his gang member cousin, tries to steal his Gran Torino, Kowalski sets out to reform the youth. Drawn against his will into the life of Thao's family, Kowalski is soon taking steps to protect them from the gangs that infest their neighborhood.

Clint Eastwood's first acting role since
Million Dollar Baby. He stated that this will be his last movie as an actor; however, he said the same about the earlier film.

Plot holes:
When Walt rescues Sue and Trey from the three thugs, he tells Trey that he should not have said "bro" to them. This would have been impossible for him to know; he pulled up to the stop sign after the incident.

Al:
God, I am sorry for Dorothy, Walt. She was a real peach.

Walt Kowalski:
Thanks for coming, Al.

Yet another Eastwood gem


I feel like I should let everyone reading this know of my inherent bias
in favor of this film. I have seen twenty eight films from Clint
Eastwood as director and have liked the vast majority of them, and
loved a good number of them (my average rating for the 28 films is
7.9). Still, something felt off about "Gran Torino" based on the
trailer. I read it as Eastwood trying to be 'badass' again, trying to
be Dirty Harry again. "Gran Torino" is not that. Walt Kowalski may have
similarities with Dirty Harry, and could possibly be read as a
significantly older version of Harry (it's a stretch), but he is a
distinctive, memorable character on his own, and I'd go as far as
saying that it's one of Eastwood's finest performances, and one which
gives him a chance to show off his dramatic and comedic chops.


I'm not going to argue that "Gran Torino" has perfect acting from the
younger supporting cast. It doesn't. In fact, some of them are
downright bad at times, but the film works in spite of its flaws. This
screenplay was probably written with Eastwood in mind (I am not sure of
the behind-the-scenes details on this) and it shows. He captures
Kowalski perfectly. The film is surprisingly humorous, something that
isn't being captured well enough in advertising. It's absolutely
hilarious at times (watch as Kowalski attempts to make a man out of
Thao by teaching him how to talk like men do), and Eastwood handles the
shifts in tone brilliantly. When the film takes a dark turn towards the
end I sat on the edge of my seat in suspense, fully aware of where it
was heading but still mesmerized by Eastwood's tour-de-force direction.
This is an artist at his prime as an actor and as a director.

Whether or not "Gran Torino" will hold up as one of Eastwood's great
films remains to be seen, and the film feels like it would be good for
multiple viewings. The characterization is strong and not simplistic at
all, you could argue that Kowalski is just another grouchy war vet, but
Eastwood's beautiful, nuanced performance as well as some neat little
touches in the screenplay (particularly towards the end) which I won't
discuss in detail to avoid spoiling anything (and it's really fun to
watch this movie unfold, Eastwood keeps the film moving at a
wonderfully involving pace) would prove you wrong. The film works on
yet another level as a deconstruction of Eastwood's image. I don't mean
that as a negative, it just adds to the film's strength as a character
study.

It's a more intimate film than Eastwood's other film this year,
"Changeling", and also on a smaller scale than many of his other films,
but it's just as ambitious in many ways. This is not a politically
correct film about a grouchy old racist suddenly turning into the most
tolerant person around, it is a film about a man who, near the end of
his life, is forced to confront his demons, and on the sunnier side
about a man who finds true friendship where he least expected it. By
the end of "Gran Torino" I had forgiven any flaws it might have, and
was completely satisfied with the film, which far exceeded my
expectations. I have a feeling that "Gran Torino", which has already
been met with strongly positive reviews (but is still being described
as a 'minor' Eastwood film by some), will eventually become an
especially important part of Eastwood's filmography.