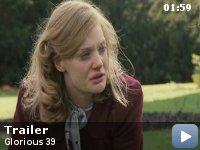 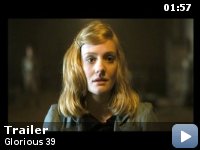 A mysterious tale set around a traditional British family on the eve of World War Two.

Storyline
1939 is set between present-day London and the idyllic British countryside in the time before the beginning of the Second World War. At a time of uncertainty and high tension, the story revolves around the formidable Keyes family, who are keen to uphold and preserve their very traditional way of life. The eldest sibling Anne is a budding young actress who is in love with Foreign Office official Lawrence, but her seemingly perfect life begins to dramatically unravel when she stumbles across secret recordings of the pro-appeasement movement. While trying to discover the origin of these recordings, dark secrets are revealed which lead to the death of a great friend. As war breaks out Anne discovers the truth and flees to London to try to confirm her suspicions, but she is caught and imprisoned and only then does she finally begin to discover how badly she has been betrayed.

A glorious triumph of the drama of anxiety and suspense


Stephen Poliakoff, Britain's own resident television drama genius (both
writer and director), has really outdone himself this time with his
first feature film in ten years. This film bears all the traditional
hallmarks of Poliakoff obsessions: the evocative power of the past, the
magic of memory, the mystical bonds of extended family connections, the
hidden energies of secrets kept buried for too long, and the shattering
consequences of the revelation of truth which has been suppressed. This
film is set in 1939 in Britain, and what it reveals is one of the most
terrifying of all the untold stories in which the true and secret
history of Britain abounds. The British are remarkable for their
ostrich qualities, and they have always been experts at not knowing
what they do not want to know, and also at thinking the unsustainable.
Here Poliakoff partially strips the veneer from the genteel surface,
but I wish he had gone further and been more explicit even than this.
His subject is the aristocratic Nazi sympathizers of the Neville
Chamberlain clique who tried to prevent Britain entering the War, and
wished not only to appease Hitler but to submit to him in the fashion
of the Vichy Regime. We must never forget that Chamberlain had been a
member of the Eugenics Society, and just imagine the fate of the
British Jews if these people had succeeded in their aim. What Poliakoff
does not state, and perhaps does not even know, is that the more
fanatical of the pro-Nazis in Britain were members of the secret
society known in Germany as the Vehme (pronounced 'fame-uh'), which
carried out ruthless campaigns of assassination of political enemies,
such as are shown in this film. During the 1920s and 1930s, the Vehme
assassinated more than 6,000 leading members of the political
opposition inside Germany, thereby so enfeebling the opposition parties
that they had no effective leadership left even before the Reichstag
fire which Hitler arranged as his pretext for the Enabling Act which
gave him the supra-legal powers to establish his absolute dictatorship
and dispense with the opposition altogether by arresting and executing
their leaders with the official sanction of the state. A typical
Vehme-style execution on the continent was carried out by hanging, and
an example of one of those which occurred in London in our own time was
the assassination by hanging of Roberto Calvi in 1982 ordered by the
P-2 Masons of Italy, who are linked to the Vehme. (It was no accident
that Blackfriars Bridge was chosen for the hanging, as the Black Friars
are the Dominicans, who were the order who presided over the
Inquisition, and Calvi was 'banker to the Vatican' as the newspapers
have often called him.) It is interesting that one of the victims of
the British Vehme shown in the film is someone we see hanging upside
down in a sack. The leading members of the Vehme call themselves the
'Wissende' ('knowing ones'). One of their secret signs of recognition
is to turn their knives round at the dinner table so that the points
are towards themselves. This harrowing and extremely nail-biting film
shows the slow and painful discovery of the British Vehme at work, as
perceived by the adopted daughter of one of them, who is a British MP
played by Bill Nighy with his usual brilliance and effectiveness. The
terrified and totally apolitical adopted daughter who discovers the
truth is played with rising levels of hysteria and terror by the
amazingly talented Romola Garai. Her eyes get wider and wider with each
passing minute of screen time as her fear mounts. Her sinister aunt is
played by Julie Christie with menacing effectiveness, and her brother
and sister (not adopted, but 'blood family' to Nighy) are played by
Juno Temple and Eddie Redmayne. All of them are horrifyingly convincing
at being blood-conspirators working for Hitler inside the British
Establishment. The scariest of all the cast, as the spy Balcombe, is
Jeremy Northam, more sinister and menacing than I have ever seen him
before, and that is saying something, as he only has to remove the
pillow case from his head when he wakes up every morning in order to
frighten the very flies on the wall. The British Foreign Office in 1939
probably contained a proportion of civil servants who might be divided
as follows: one third Nazi sympathisers, appeasers, or 'Petainists',
one third Soviet agents, and only about one third simply loyal to their
country. The Home Office had in proportion fewer communists but more
fascists than the Foreign Office. Britain in the 20th century produced
traitors of all kinds at such a rate that there was simply no way of
keeping track of them all, and few of them have ever been publicly
acknowledged. (The handful the public knows about were not necessarily
the most important ones anyway.) Just why the anonymity of the fascist
traitors is still being protected today is something of a puzzle. This
film goes a long way towards ripping the lid off this scandal, but the
film is in no way a political film, it is a personal drama in the
format of a hyper-tense thriller. Poliakoff was too clever to turn this
into a didactic piece, and keeps it very much as a typical
Poliakoff-style personal and family drama. The production values are
marvellous, the music is good, the locations are absolutely staggering,
everyone is brilliant, and the Poliakoff script and direction are the
best of all. If anyone is looking for British television drama to rival
the American MAD MEN (2007-2010, see my review), Poliakoff's TV series
are the answer every time. And for a thriller feature film with real
depth and meaning, how much further can anyone go than this one?
Poliakoff is the Rembrandt of contemporary British filmed drama, who
paints the light magically and miraculously with a uniquely dark and
Manichean brush.