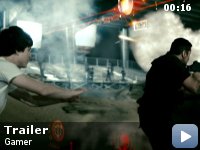 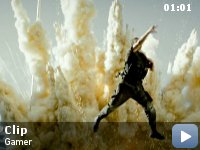 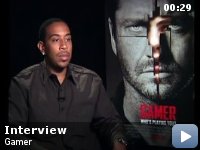 In a future mind-controlling game, death row convicts are forced to battle in a 'doom'-type environment. Convict Kable, controlled by Simon, a skilled teenage gamer, must survive 30 sessions in order to be set free. Or won't he?

Storyline
Set in a future-world where humans can control other humans in mass-scale, multi-player online gaming environments, a star player from a game called "Slayers" looks to regain his independence while taking down the game's mastermind.

Taglines:
In the near future, you don't live to play… you'll play to live.

The motorcycle driven by Trace is a Buell Firebolt.

Revealing mistakes:
In the scene where it reads "Kables Last Stand" on three separate buildings, the furthest left building has the original banner reflection of the middle building in place of the word "Last", including an NBC logo at the bottom.

Humanz Brother:
That's right. It is a game. You want to win it, don't you?

Simon:
Yeah, I intend to.

Humanz Brother:
Well then you need to cut your strings, puppet master. Imagine a Slayer who don't got to wait to be told what to do. No ping, ya dig?

Know what you should expect


My movie philosophy: don't blame a movie for not being what it's not
meant to be.

To enjoy a movie, you don't need the movie to be amazing, great, or
even good (sometimes). You just need to know what you should expect.

So what do you expect from gamer? If you want gore, violence, blood,
nudity…go ahead and see it. If you want Gerald Butler running around
shooting people, fighting people, baring his muscles and looking tough
like action heroes do, go ahead and see it. If you want Michael C. Hall
playing an evil guy trying to take over the world, and baring his
muscles, and even showing off his Broadway background a little bit, go
ahead and see it. (but you'd be a little disappointed since he shows up
less than you'd expect as this is quite a short movie, only 1.5 hours).
Even if you want to see some hot lesbian actions probably imagined by
very non-lesbian people, or a cute teenage boy who probably isn't
supposed to do anything other than being a cute teenage boy…go ahead
and see it.

But If you want go in and find some surprise- and twist-filled plot,
some complicated multi-layer character development, or some brilliant
insight into society or even humanity, then no, don't go see Gamer.

The problem is, if you are really expecting the later things I
mentioned, I think it's partially you fault that you are going to spend
one and a half hour of your precious time sitting in a theater
suffering from this movie and then hate it with a passion. Because
really, those aren't what Gamer is meant to be, even though some people
may actually believe that they are.

The reality is that while not what many would call a great (or even
good) movie, Gamer could be thoroughly enjoyed, as long as you know
what it should be. Because I think it's everything it set out to be.
You just need to (maybe grudgingly) accept what it's supposed to be and
either enjoy it for what it is, or realize that it's not a movie for
your high level of intelligence and ignore it completely.