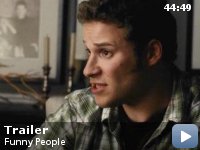 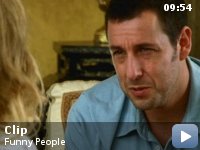 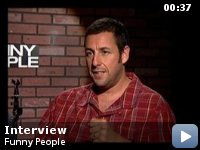 When seasoned comedian George Simmons learns of his terminal, inoperable health condition, his desire to form a genuine friendship cause him to take a relatively green performer under his wing as his opening act.

Storyline
George is a very successful stand up comedian who learns that he has an untreatable blood disorder and is given less than a year to live. Ira is a struggling up-and-coming stand up comedian who works at a deli and has yet to figure out his onstage persona. One night, these two perform at the same club and George takes notice of Ira. George hires Ira to be his semi-personal assistant as well as his friend.

Taglines:
George Simmons was prepared to die, but then a funny thing happened.

The scene where George Simmons asks to see Ira's penis is based on real life. Adam Sandler and director Judd Apatow used to be room mates in college. According to Apatow, Sandler actually asked Apatow: "Let me see your penis". (Apatow actually told this story to David Letterman on The
Late Show with David Letterman in 2007.)

Factual errors:
Clarke invites Ira and George to watch the football finals from Australia, in a scene taking place in December. Australian football finals are played in September. In case of play-offs they may drag out into early October, but no later.

Leo:
I can't believe George Simmons is dying. I grew up on his movies.

"Funny People" not great, but fascinating and complex


I need to get my biggest criticism for "Funny People" out of the way
here at the beginning: it is not the movie the marketing campaign would
lead you to believe it is. While it is true of the ads that this film
is more than just a comedy and that it contains some heavy themes
involving a near-death experience, it would be more accurately
described as a dark drama punctuated by some very funny lines. But I
suppose that doesn't get people in to see the movie.


After all, the film stars Adam Sandler and Seth Rogen (who have
wonderful rapport), among many other, uh, funny people, and is written
and directed by Judd Apatow, the director of "The 40-Year-Old Virgin"
and "Knocked Up." Of course the trailers have been playing up this
angle but, as my wife commented, that's like marketing "Schindler's
List" as "From the director of 'E.T.' and 'Jaws'." It doesn't tell you
much about the movie you are about to see.

This beef aside, what you will see is a very mature drama (yes, I said
mature despite the rampant penis jokes) reminiscent of the best work of
Hal Ashby and Cameron Crowe. Sandler proves once again that he is a
fine actor, and his performance as successful movie star/comedian
George Simmons is tonally similar to his fantastic work in "Punch-Drunk
Love" and "Reign Over Me." A very isolated man made rich by a number of
films that look like rejected Wayans Brothers ideas, George lives in a
castle of a house, complete with an indoor and an outdoor pool. His
only obvious human contact consists of photo ops with his fans, and the
servants at home that he keeps at arm's length. Early on he is
diagnosed with a rare blood disorder for which no clear treatment
exists. Death on his doorstep, he begins to examine his life. He hates
himself, but that he let so many important relationships go to waste is
something he hates even more. It's time for a change.

Enter Ira Wright (played tenderly by a slimmed-down Rogen), a
struggling stand-up who works at a deli counter and lives on a pull-out
couch and in the shadow of his successful roommates, comic Leo (Jonah
Hill) and sitcom star Mark (Jason Schwartzman, who also co- wrote the
simple acoustic score with Michael Andrews). Ira and George cross paths
at a comedy club where George performs a self-loathing monologue that
generates almost no laughs. Ira follows his act, trashing George's
apparent depression. In spite of this, George hires Ira to be his right
hand man, as a joke writer when he decides to return to stand-up, and
as a general errand boy. The dynamic of this new relationship is
unclear to Ira, but it seems like a foot in the door—and it sure beats
serving macaroni salad to soccer moms.

What follows is a long road to recovery, physically and emotionally. I
say long, because the movie runs almost 2 ½ hours—a daunting running
time for a comedy or a drama. Anyone who has enjoyed Apatow's work as a
director knows that his films have become incrementally longer. At
times, I wished he would take the advice from the character Alan Tudyk
played in "Knocked Up," as Katherine Heigl's boss who instructs her to
not necessarily lose weight, but to "make everything tighter." I
wouldn't know what to tighten exactly, because there are many excellent
scenes. No matter. I would rather sit through 2 ½ hours of this than
the same length of loud, racist pummeling robots. I hope there are
other moviegoers out there that share my sentiment.

In addition to the great work by Sandler and Rogen, we have Mrs.
Apatow, Leslie Mann. She plays Laura with great vulnerability, the love
of George's life, left behind years ago when he cheated on her. She has
since married the Australian version of George, Clarke (a hilarious if
underused Eric Bana). They have a big house and two beautiful and funny
daughters played by Apatow's and Mann's real-life daughters Maude and
Iris, who also played Mann's and Paul Rudd's daughters in "Knocked Up."
George and Laura reenter each other's lives and try to pick up the
pieces, much to the dismay of the reserved, more morally-centered Ira.

There is an awful lot of movie to cover, so I will stop there. The
screenplay, while thoughtful, emotional and at times hilarious, follows
a non-structure that would infuriate Robert McKee. There is no
three-act structure. There is no classic antagonist. The unusual pacing
allows the story to unfold more like life in that way. I'm curious to
see how this movie will be received by audiences expecting a typical
Apatow film. The thing I appreciated most about "Funny People" is that
Apatow takes huge risks with the ambitious goal of "making a very
serious movie with twice as many jokes" as his previous films. That he
more often than not achieves his goals is a remarkable feat, and while
"Funny People" isn't a great movie, it shows you a fascinating side of
show business, and more importantly, it makes one believe that we can
look forward to a wonderful and varied body of work from an original
and, maybe someday, great filmmaker.

Consensus: Expect a fascinating drama with fine acting and a few hearty
laughs (if you can handle crude humor). Just don't expect the movie
they show you parts of in the previews.