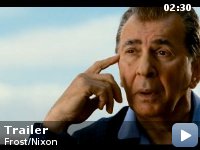 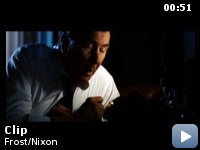 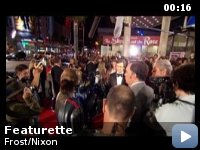 Storyline
Writer Peter Morgan's legendary battle between Richard Nixon, the disgraced president with a legacy to save, and David Frost, a jet-setting television personality with a name to make, in the story of the historic encounter that changed both their lives. For three years after being forced from office, Nixon remained silent. But in summer 1977, the steely, cunning former commander-in-chief agreed to sit for one all-inclusive interview to confront the questions of his time in office and the Watergate scandal that ended his presidency. Nixon surprised everyone in selecting Frost as his televised confessor, intending to easily outfox the breezy British showman and secure a place in the hearts and minds of Americans (as well as a $600,000 fee). Likewise, Frost's team harbored doubts about their boss' ability to hold his own. But as cameras rolled, a charged battle of wits resulted.

Taglines:
400 million people were waiting for the truth.

Both Frank Langella and Michael Sheen repeat the roles they created on stage. Ron Howard would only agree to direct if the studio would allow both actors to appear in the film version.

Continuity:
In the scene on the final day where Brennan follows Nixon into the side room, the door is closed, and the Secret Service agent on the right hand side signals two, as in two entered the room. When the camera angle changes to get Frost reaction, the same agent is motioning two again. There would not be a need for the agent to twice motion that two people had entered the room.

Richard Nixon:
I shall be your fiercest adversary. I shall come at you with everything I got, because the limelight can only shine on one of us. And for the other, it'll be the wilderness, with nothing and no one for company but those voices ringing in our head.


A remarkable performance by Frank Langella as Richard Nixon transforms
this unexpected Ron Howard film into a gripping and unforgettable
experience. The behind the scenes of the famous David Frost, Richard
Nixon interviews pale in comparison to the compelling sight of
Nixon/Langella thinking. It was difficult to forget that Michael Sheen
was not Tony Blair but David Frost. Sheen's Frost is an entertaining
foil to Langella's somber,sad, desolate portrait of the former
president. Ron Howard finds a winning pace giving the true tale a
fictional slant. Unfortunately I never saw the stage production and the
film never betrays its theatrical origins. In a bizarre sort of way
this is Ron Howard's most cinematic film. I highly recommend it.