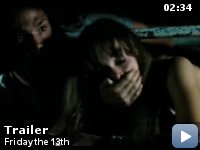 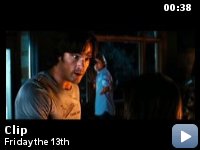 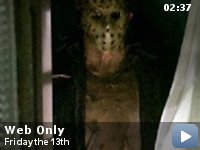 A group of young adults discover a boarded up Camp Crystal Lake, where they soon encounter Jason Voorhees and his deadly intentions.

Storyline
A group of young adults set up tent near the abandoned summer camp where a series of gruesome murders are said to have taken place back in 1980. The perpetrator was a grieving mother, driven insane by the drowning of her child, Jason, whom she believed was neglected by the camp counselors. As legend has it, the last survivor of the attacks beheaded the woman. But then Jason came back, and now he is a vengeful and inexorable killer, wielding crossbows, swords, axes and other sharp instruments. The legend proves horribly true, as these campers quickly discover. Six months later, the brother of one of those campers distributes posters of his missing sister. The police believe she took off with her boyfriend; but he knows better. The brother crosses paths with an uptight young rich guy who is having his girlfriend and friends over at his parents' cabin. The brother ends up at the cabin himself just before his sister's attacker sets upon them all.

Taglines:
Bad luck? …You don't know the half of what you're in for.

Samuel Bayer turned down the offer to direct.

Continuity:
Chelsea gets hit by the boat after falling off the wake board, and when she emerges from the water, we see her holding her head as there is blood from her head. When she hides under the boat pier whilst Jason is on top of it looking for her, the blood is gone and there is no visible injury

Pamela Voorhees:
You're the last one. I've killed all the others. It'll be easier for you than it was for Jason.

Camp Counselor:
Why are you doing this?

Pamela Voorhees:
You need to be punished for what you did to him.

Camp Counselor:
I didn't do anything.

Pamela Voorhees:
You let him drown. Jason was my son.

Camp Counselor:
I didn't do anything. No. No. No. Please.

Pamela Voorhees:
You should have been watching him. Every minute.
[…]

The Texas Chainsaw massacre Remake… Or was it Friday the 13th?

Did you know a horror franchise drowned a day before this week? The
Producer and Directer weren't paying any attention… They were
counting their money while that cult icon drowned. It's name was Friday
the 13th. I watching the night it happened. Losing my temper… there.
I was a fan. Friday the 13th should have been awesome. Every minute! It
was… It wasn't a very good remake. We can give up now… fans.


You see Friday the 13th was my favorite movie… and today it was
raped.

I mistakingly had high expectations of this movie. Of course I was
bothered by the fact that Marcus Nispel, who did such a smash up job on
Texas Chainsaw Massacre remake, was directing. In fact besides the fact
that Jason wore a hockey mask, had an affinity for machetes and his
mother was in it for five seconds. It was almost impossible to
differentiate between the two movies. Lots of slack jawed yokels and
shaky camera action in the dark, just like Chainsaw. Poor story telling
with numerous loose ends, just like Chainsaw. Terrible adaptation, just
like Chainsaw.

Okay, maybe I'm being a little too hard on the movie. The first few
minutes of the movie were incredible. Of coarse there' no rhyme or
reason to Jason's return from the grave, but they never had on in the
original either. The elements that they took from the first four movies
were there, and yes I said 'Four' movies. There were elements from the
Final Chapter despite what the propaganda says. The acting wasn't
terrible. Yoo's character was probably the funniest character to ever
be in a Friday the 13th to date. The under the dock kill was so classic
that it felt like it belonged and it was good to see Jason in his old
sack mask again.

Many key elements were there, but only for a second or two. Mrs.
Voorhees head wasn't really elaborated on and wouldn't be caught as
significant to anyone who hadn't seen the original movies. Despite all
the hype about how Jason gets his hockey mask in this movie, it was a
big let down and just seemed a little too convenient. The locals in the
town were basically rejects from the Texas Chainsaw Massacre. In fact
the scenery may have appeared New Englandish… but the locals just
screamed, "I'm from Texas!"

Jason Voorhees. How could they screw up a character like Jason
Voorhees? Give these folks a hand though. They did it. I started to
realize that Jason wasn't quite himself around the sleeping bag death
scene. First and foremost Jason is a killer, not a sadistic torturer.
Sure he's done some pretty brutal things to his victims, but roasting a
person alive, just isn't his style. It's too much set up for Jason
honestly. Additionally, if Jason has you on the ground with a machete
coming down at you, you are DEAD. He doesn't lock you in his basement
and keep you alive for months because you're a pretty girl who looks
like his mother. Jason kills. And he especially kills if you
impersonate his mother.

The end… in more ways than one. When I watched the ending of this
movie I literally had the feeling that I was ripped off. The pay off
with the wood chipper wasn't even utilized here. And then for some
reason the survivor(s), another thing that was lame, decided to dump
his body in the lake. This means they had to actively decide it was a
good idea to get rid of the evidence that they were not the manics that
killed a bunch of people, but it also means that they had to take Jason
out of the chipper, take the chain off his neck, remove his mask, and
carry him all the way out to the dock. And if Jason was playing possum
the entire time, why didn't he just kill them when he still had access
to a wood chipper and a barn full of tools?

In fact this movie raised nothing but questions. Who killed Mrs.
Voorhees? What ever happened to her? Why did Jason miraculously come
back from the dead? Why was his body still intact after all those years
in the lake? Why does Jason wear a mask? How did he keep the rats from
eating his mother's head? Why did the local cops not bother
investigating anything? How did Jason learn to hook up electricity to
his camp? Why didn't the power company notice nobody's paying the
electric bill for an abandoned summer camp? Why would Jason keep some
girl chained up in his basement? Why do all the locals of Crystal Lake
appear to have come from Texas? Why did they bother doing makeup for
Jason when they show his face for maybe two frames of the whole movie?
Why does Jason pop out of the lake at the end with his mask on? What
were they thinking? Why did I see this miserable attempt to remake a
great movie? Why am I wasting more time on a bad review? Why are you
still reading?

All in all a terrible movie.

TagsUSA
The Other End of the Line
District 13: Ultimatum