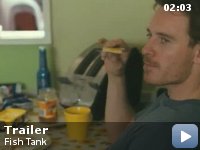 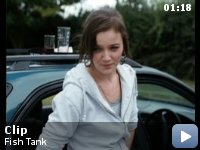 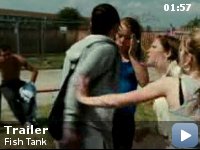 Everything changes for 15-year-old Mia when her mum brings home a new boyfriend.

Storyline
Mia, an aggressive fifteen-year-old girl, lives on an Essex estate with her tarty mother, Joanne, and precocious little sister Tyler. She has been thrown out of school and is awaiting admission to a referrals unit and spends her days aimlessly. She begins an uneasy friendship with Joanne's slick boyfriend, Connor, who encourages her one interest, dancing.

Taglines:
Live, love and give as good as you get.

The film was shot chronologically, and the actors were shown only the part of the script they would be filming the following week – none of them knew what would happen to their characters later in the film.

Continuity:
When Mia takes the alcohol bottle from the woman at one of the parties, it is almost empty. Later, Mia is seen drinking from the bottle in her mother's bedroom and the bottle is half full.

Keeley:
[from an answering machine]
Hey, it's Keeley. Leave me a message.

Mia:
Keeley, it's me. What's going on? I've left like three messages. I said sorry, didn't I? You know what I'm like. I was pissed off. Ring me back, you bitch.

Right out of the water


"All my films have started with an image," says director Andrea Arnold.
"It's usually quite a strong image and it seems to come from nowhere. I
don't understand the image at first or what it means, but I want to
know more about it so I start exploring it, try and understand it and
what it means. This is how I always start writing." What does the image
of a fish tank conjure up for you? On the inside longing to look out,
is fifteen-year-old Mia. Trapped in a housing estate. Trapped in a
single parent family. Trapped by people around her she can't respect.
Trapped in herself. For being fifteen. She has her own inner world,
fighting to manifest itself . Fortified by cigarettes and alcohol she
can kick in the door of the empty nearby flat. A bare floor. Her CD
player. Practice her moves. A better dancer than those kids on the
block she just nutted.

Mia is quite content to carve out her own double life, f*ck you very
much! Never mind she gets caught and nearly comes to grief trying to
steal a horse. And social workers don't scare her. But mom's new
boyfriend – that could be a pain! A real spanner in the works.
Especially when he's so annoyingly nice.

Under Andrea Arnold's hand, life on this inner city concrete backwater
is suddenly very alive. Banalities become beautiful. Like sunlight
through cracked glass. Vibrant, gritty and riveting, but in a way that
entertains powerfully. As pulsating and funny as Trainspotting but
without the yuck factor. Its momentum is overpowering. We never know
what is going to come out of Mia's mouth or where events will lead.
Each jaw-dropping new scene surprises yet seems the result of
inexorable momentum. As if that wasn't enough, the story mercifully
avoids kitchen-sink drama, excessive violence, drugs, getting pregnant,
grand larceny, car crashes and all the other cliché-ridden devices to
which cinema-goers are usually subjected. Tightly controlled, Fish Tank
attacks with a potent and thought-provoking arsenal of story-telling.

Andrea Arnold proved she could do hard-hitting realism with her
award-winning debut, Red Road. Here she excels her earlier efforts but
still imbibes many of the verité approaches and senses of discipline
that have filtered down from the Dogme and Advance Party movements. Her
'strong initial image,' or lack of subservience to more traditional
methodology, maybe reminds of the devotion to experimental, avant-garde
cinema taken by artists-turned-filmmakers such as Steve McQueen
(Hunger) or theme-over-story technicians such as Duane Hopkins (Better
Things). Michael Fassbender, who took reality to new heights as Bobby
Sands in Hunger, here plays the mystifying and warmly charismatic
Connor (Mum's boyfriend).

Arnold didn't allow actors to read the script beforehand. They were
given their scenes only a few days before filming. For the part of Mia,
she chooses a complete unknown with zero experience. Arnold spotted
Katie Jarvis at a train station after drawing a blank with casting
agencies. "She was on one platform arguing with her boyfriend on
another platform, giving him grief." However the performance is
achieved, Jarvis is electrifying. If Arnold wanted a 'real' person for
the role, this seventeen-year-old takes over the screen with raw
adolescent power. Says Arnold, "I wanted a girl who would not have to
act, could just be herself." Fish Tank will lift you out of your seat
and on an unstoppable flight, ricocheting against confines of
circumstance and imploding a dysfunctional family with its head of
hormonal steam. Laugh, cry, hold on tight. You will need to. I could
almost taste the vodka, as Mia goes through her Mum's dressing table
drawers, bottle in hand. I wish all British films were this good.

TagsEnglandLondonUK
What Doesn't Kill You
The Rebound