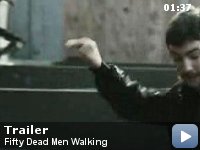 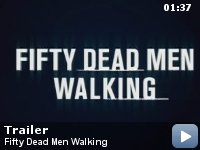 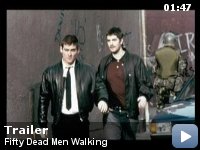 Based on Martin McGartland's shocking real life story. Martin is a young lad from west Belfast in the late 1980s who is recruited by the British Police to spy on the IRA…

Storyline
Based on Martin McGartland's shocking real life story. Martin is a young lad from west Belfast in the late 1980s who is recruited by the British Police to spy on the IRA. He works his way up the ranks as a volunteer for the IRA whilst feeding information to his British handler and saving lives in the process.

Taglines:
When you cross the line there's no going back.

Anachronisms:
(At 1:41:44) You can clearly see an poster add for iPhone when they are driving. iPhones were not around at the time the movie is set.

Fergus:
His name is Martin McGartland, and when I met him he was an unemployed Catholic hood selling stolen goods.

Fantastic piece of British cinema…but not to be taken as a history lesson by any means.


Set in 1980s Belfast, when the Troubles were devastating Northern
Ireland; this is the story of 22 year-old Martin McGartland (Sturgess)
who, in real life, became involved implicitly with both sides of the
conflict. The film details how he worked firstly for the IRA and was
subsequently sought after and enlisted by the British police as a spy;
leading him to live a perilous double-life. The title (taken from
McGartland's book) refers to the number of people he believes he saved
whilst working undercover.

The film begins by establishing him as an ordinary young man growing up
within the bleak setting of West Belfast during that time, making very
little money by selling knock-off goods door-to-door. He is mostly
concerned with making enough money to impress his love-interest, Lara
(Press); but he is also an Irish Catholic, who vehemently opposes the
British occupation of the country and believes in the cause of a united
Ireland. However, when he begins to work for the IRA, he becomes a
first-hand witness to some of the atrocities committed by them and
begins to have doubts about his political standpoint. Meanwhile, a
member of Special Branch, Fergus (Kingsley), wants him to become an
informant on IRA activities. Initial attempts to recruit him are
useless, but McGartland eventually accepts the proposition; the
violence he had witnessed still being fresh in his mind, along with the
offer of a substantial sum of money in return for his work. The
remainder of the film is a tense and gripping set of events, all the
while focusing on McGartland's inner conflict. He is portrayed as a
confused young man, exploited by both sides and absorbed completely by
the two equally tormenting responsibilities which he cannot escape: on
one hand, he is betraying the cause which his ancestors had given their
lives to for centuries – his long-standing belief of freedom for his
country; but on the other hand he is stopping the all-too-real violence
he encounters on a day-to-day basis which, no matter what history has
taught him, he cannot find justification for.

Although there are films which handle this subject matter far better, I
feel that Fifty Dead Men Walking must be praised for the social realism
and consistently gripping drama that is conveyed from the outset
through the locations used, the cinematography and the outstanding
performances given by the main cast. Sturgess captures the complexity
of McGartland's character and, considering how difficult it must be to
imitate a West Belfast accent, he and Press do a convincing job. I was
compelled to watch the film from start to finish and credit is duly
given for this being a fantastic piece of British cinema.

There are also, of course, the (dubious) factual elements associated
with the film. It was filmed at the very location where these events
were taking place little more than twenty years ago, which adds to the
sheer tension felt throughout. The film is highly emotive and deals
with controversial issues that have been highlighted again recently,
where a dissident group, the "Continuity IRA", has claimed
responsibility for the murder of a policeman. The film will resonate
with people on many levels. It is true that there are overwhelming
accounts of horrific violence from the Irish Republican Army (a small
part of which are shown graphically in the film), yet there are many
discrepancies in the film and viewers may not know the vast complicated
past associated with the Troubles and so, we are presented with yet
another media representation of one side of the fierce conflict in
which, truthfully, equal acts of brutality have been committed on both
sides throughout history. Ultimately, I would urge people to watch the
film for its brilliant script, performances and drama; but not to take
it as a lesson in Irish history by any means. If anything, whilst much
hostility still exists today between some Nationalists and Unionists,
the film succeeds in demonstrating the futility of such violence after
hundreds of years of warfare and above all else, the overriding desire
for peace from those people who have had to live amongst the fighting
and still live with the concern that it may one day return.