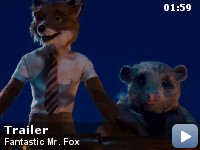 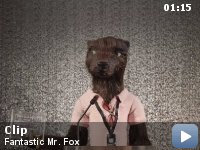 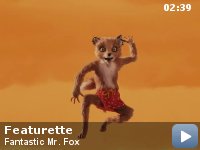 An urbane fox cannot resist returning to his farm raiding ways and then must help his community survive the farmers' retaliation.

Storyline
It is the story of one Mr. Fox and his wild-ways of hen heckling, turkey taking and cider sipping, nocturnal, instinctive adventures. He has to put his wild days behind him and do what fathers do best: be responsible. He is too rebellious. He is too wild. He is going to try "just one more raid" on the three nastiest, meanest farmers that are Boggis, Bunce and Bean. It is a tale of crossing the line of family responsibilities and midnight adventure and the friendships and awakenings of this country life that is inhabited by Fantastic Mr. Fox and his friends.

Taglines:
Michael Gambon is The Scoundrel

The red facade of the "Little Theatre" in the scene where Mr. Fox throws burning pines is modeled after the real Little Theatre in Bath, Somerset.

Continuity:
On Clive Badger's desk there is a single paper clip near the pen-holder. But in the reverse view on Mr. Fox, the paper clip is missing.

Ash:
You should probably put your bandit hat on now. Personally, I- I don't have one, but I modified this tube sock.
[they put on their 'hats']


In recent years, Disney's Pixar division, with their monopoly over
animation, has churned out some of the biggest, funniest, most
emotional material to hit theaters in the last ten years. By this
point, the public knows their aggressive marketing campaign and knows
it well. Adult humor and themes geared not only toward the kids, but
the parent's as well. The mass appeal? Mom and dad can now take their
eight year old to the local multiplex and fork over the steep price of
admission without wasting it on a two hour long power nap. Last
quarter's CGI constructed Pixar extravaganza "Up" captured audiences'
hearts, imaginations and pocket books, raking in a less than modest 292
mil at the box office, making it one of the highest grossing animated
films of all time. Along comes "Fantastic Mr. Fox", helmed by auteur
Wes Anderson, a crack team at Twentieth-Century Fox (Yes, I said Fox)
and Indian Paintbrush, one of Wes' collaborators on his predecessor
"The Darjeeling Limited". If there's one thing that's detrimental to
the Trump-like successes of the Disney powerhouse, it's a new found
competition…let the games begin.


"Fantastic Mr. Fox" is a pure delight. A feast for the eyes. From frame
one, it takes no time at all to draw you into its beautiful visuals of
vast countryside's, running streams and falling foliage, all in
marvelous stop motion. That's right I said it, stop motion. From the
course hair on Fox's face to the cotton ball chimney smoke of Boggis,
Bunce and Beans warehouse smoke stacks, everything's been designed from
scratch, much of which involves simple household items. After just a
few minutes in Wes Andersons world inspired by written cues from the
mind of the British children's author Roald Dahl (inspired by Dahl's
own hometown) you're dragged out of the theater and immersed in a
faraway land for the entirety of its modest and to the point one hour
and twenty minute runtime. The real treat lies in the notion of how
long it actually must have taken these top notch art designers to bring
everything to life. There are forces at play here that give one a clear
sense of the fact that stepping away from a computer screen and getting
things done the hard way pays off when witnessing the final product.
Production value is staggeringly noticeable and truly memorable. I for
one am still transfixed by the universe of Mr. Fox.

Among one of the droves of Wes Anderson fans, I had high expectations
going into the film. Anderson is one of those rare writer/directors
that manage to separate themselves from the societal norm, branch out
and go their own way. With Fantastic Mr. Fox, he effortlessly
supersedes his reputation as one of the most unique Directors of this
century. You may be asking yourself how you direct a bunch of puppets,
but Andersons 'puppets' are among some of the most realistic and
complex that you're likely to meet. With human emotions, expressions
and actions, it is clear that Mr. Anderson took great time and
preparation during the film's production and pre-production to make
sure everything came off as smoothly and impactful as possible. Look
out for a particularly funny scene during one of the nightly stake outs
portrayed wholly through images on security camera monitors. Very, very
well thought out and clever.

Fox, for being aimed at children, is probably one of the most adult
animated films I've seen to date. Think Pixar Redux. There's smoking,
'cussing' and above all some extremely heavy handed adult humor and
themes. In Wes Andersons sharp, funny, unbelievably witty script, he
keeps all of that classic dry comedy that's become synonymous with his
trademark, the only exception being that it's coming from the mouths of
the animals he's intricately created. Parts had me gasping for air;
others had me rolling in the aisles. It's clear to me that by now Wes
has really honed in on his craft and gets marginally better with each
new picture.

Wes Anderson, with his creative brain that can only be compared to an
Einstein of the medium, lays all his cards on the table and ups the
ante for Pixar Studios. When asked if he wanted to continue to make
animated films he commented by saying, "I would certainly love to make
other animated films in the future." Could this be his new calling?
Truly focusing on the niche market of animated movies tipping the scale
more in favor of adult audiences? One would love to think so (of course
without turning into another Robert Zemeckis and taking a permanent
vacation from live action). Fantastic Mr. Fox is something to be
experienced. Children will love its adorable characters while adults
will marvel in its ability to connect with them. After all, each of us
was a kid at one time or another and because of that there has never
been a better excuse to pretend again.