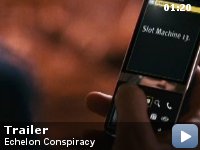 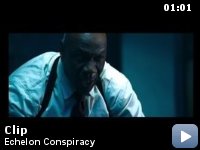 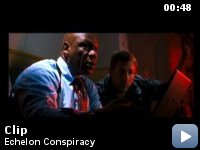 At first, the strange phone messages promised great wealth. Soon, though, government agents pursue the young engineer receiving them around the world.

Storyline
Max Peterson is a globe-trotting techno-whiz who installs security systems on computers. He receives an anonymous gift: a phone which sends messages that enable him to win at a casino. Max soon finds himself pursed by hit men, the casino's security chief, and a CIA operative. Who's sending Max messages? Previous recipients of similar windfalls have ended up dead. After a couple of close scrapes, Max realizes he's in danger, so he tries to find out the root of the conspiracy – which seems to have access to every security camera in the world – before he's the next victim. Why is this happening to him, and who can he trust?

Taglines:
Security comes at a price…

Continuity:
During the scene where echelon is upgrading itself, Raymond Burke's suit and tie changes from gray with a striped tie to brown with a polka-dotted tie and then back again.

Curator:
Everything okay down there?

Curator:
That locks it?

Max Peterson:
[causes a massive short]
Okay, now your servers are down because of a power surge, a grid malfunction, or maybe even a bomb. Now, if the intruder tries to reboot your servers or access the data, he'll always hit this screen.
[login screen]

Max Peterson:
This is your BIOS-level password. Without it, nothing works in this room.
[…]

Eagle Eye on the cheap


And that's not necessarily a bad thing. After all, let's not pretend
Eagle eye was particularly original. It was essentially a warmed over
version of Enemy Of The State which was probably based on some other
movie I've never seen. Basically what you've got is you're super
paranoid information state super computer run amok strategy here. And
for the budget it actually works pretty well. The budget is far from
shoe-string, but you're not going to see a national deficit's worth of
special effects like you did in the two aforementioned films. Let's
just all be happy this film proves that there is something that Michael
Bay CAN'T get his hands on (and more than like ruin…Friday the
13th,anyone?), shall we?

The performances are all fine if not somewhat forgettable. Ving Rames
succeeded once again in annoying the crap out of me, but that's nothing
new. Martin Sheen is an amazingly easy replacement for Jon Voigt (who
played essentially the same character in Enemy Of The State). You know,
the somewhat power mad head of any given 3 letter intelligence
organization (CIA, FBI, FSB, KGB, CBS, etc.) who realizes the error of
his ways after everything heads south. Well…maybe not so much for
Sheen, but what do you expect? The guy takes the weirdest projects. In
any event, Tamara Feldman does fine as the amazingly hot but somewhat
pointless love interest/double agent/tougher-than-she-looks chick. If I
had one major complaint about the whole thing, it's got to be the
simply massive suspension of disbelief required for all but the most
hardcore of the tin foil hat crowd. While I too am concerned about the
amount of surveillance used by the US government, I am not worried
about being tracked by literally everything with a lens. I am well
aware that not every single CCTV, traffic, bank, and security camera is
accessible by anyone with an internet connection. That's why it's
called CCTV…because it's CLOSED CIRCUIT. And since when do Russian
hackers have technology that can get the job done better than a
multi-billion dollar agency like the NSA? Whatever. It's still not a
bad way to kill 100 minutes of your life. Could've used a bigger
budget, but it does fine with what it has. Now if I could just figure
out who's dumb enough to do anything a text message tells them I'll be
set.