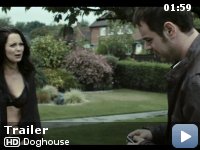 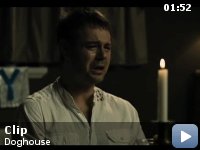 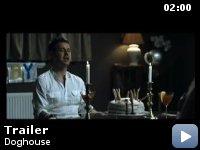 A group of men head to a remote village to help one of their friends get over his divorce; when they get there, though, they discover that all the women have been infected with a virus that makes them man-hating cannibals.

Storyline
Vince is handling his divorce badly. He's depressed. Gone to pieces. But his mates aren't giving up on him. Struggling with their own women troubles, they drag him off for an ultimate lads drinking weekend in the country. Arriving in the village of Moodley where the women outnumber the men 3:1, the boys find themselves holidaying in a village overrun by psychotic, homicidal Zombirds with a thirst for male flesh.

Taglines:
The battle of the sexes just got bloody……….

The name of the company that drives them to the village is West Tours named after the film's director Jake West.

Banksy:
It could be worse!

Neil:
How many fingers am I holding up?

Neil:
How could this get any worse?

Bird flu is certainly getting out of control!…


Vince (Stephen Graham) is going through the final stages of his divorce
and to help him through this period his friends Mikey (Noel Clarke) and
Neil (Danny Dyer) decide to take him and a few of the other boys to a
remote village outside the humdrum of their London lives to get, in
Dyer's own words; 's**tfaced'. However, when they turn up to the
incredibly eerie village of Moodley to find flesh-eating, man-hating,
cannibalistic women who want to do nothing more than rip out their
internal organs and eat them for breakfast, the boys realise they have
bitten more than they can chew and must fight their way through a
barrage of blood-thirsty women in the most misogynistic way imaginable.

The premise of the film completely reflects the manner in which Jake
West approaches this project, with a gleeful nod towards plenty of
harmless sexist humour and cheap gory death sequences that are all
nice, light-hearted and fun. Neil, Vince and Mikey are all your typical
working-class likely lads out to simply flirt with the opposite sex and
drink as much as their body-weight, with Danny Dyer in particular
needing to place little effort in recreating his Cockney 'laddish'
persona (yet again) on the big-screen. While Dave Schaffer's script
contains many easy-going humorous gags to keep your attention ticking
over while the next axe, gnome or sword heads to try and end the boy's
misogynistic ways and eliminate the male chromosome all in one.

'Doghouse' is nowhere near the heights of Pegg/Frost's
rom-zom-com-supremo 'Shaun of the Dead', but it isn't the worst film
you will see this year. At a short running time of 85 minutes, you'll
be cheaply entertained with boys being boys and women being…err,
evil, vicious, un-relentless and, well women (just kidding!). This a
film you'd probably enjoy seeing more after you've been kicked out the
local Pub at closing time and are heading home with your Chicken
Jalfrezi in one hand and the DVD in the other.

TagsEnglandUK
The Informers
The Six Wives of Henry Lefay