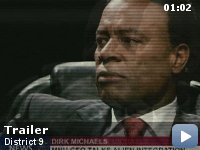 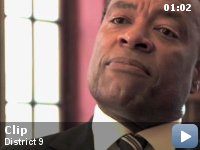 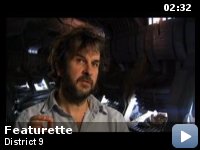 An extraterrestrial race forced to live in slum-like conditions on Earth suddenly finds a kindred spirit in a government agent who is exposed to their biotechnology.

Storyline
In 1982, a massive star ship bearing a bedraggled alien population, nicknamed "The Prawns," appeared over Johannesburg, South Africa. Twenty-eight years later, the initial welcome by the human population has faded. The refugee camp where the aliens were located has deteriorated into a militarized ghetto called District 9, where they are confined and exploited in squalor. In 2010, the munitions corporation, Multi-National United, is contracted to forcibly evict the population with operative Wikus van der Merwe in charge. In this operation, Wikus is exposed to a strange alien chemical and must rely on the help of his only two new 'Prawn' friends.

Taglines:
For humans only. Non-humans banned!

The language used by the aliens (clicking sounds) was created by rubbing a pumpkin.

Continuity:
When Wikus is taken into hospital for the first time and sees his hand turning into a "prawn's arm", he freaks out and the doctor puts a mask over his mouth and nose to administer some oxygen and holds it with his hand. When the shot changes there is a rubber band holding the mask to his head, but there is no way that the doctor could have managed to put it that way.

Wikus Van De Merwe:
[Points out Alien graffiti]
This is basically a guy, and there's 3 humans here, basically trying to make a warning, you know, saying "I kill 3 humans, watch out for me."


I do not give out ratings of 10 lightly, but here it is – the first
film in years that has been deserving of the rating.

Neill Blomkamp brings to screens a fantastic, gritty, realistic piece
of science fiction with District 9. Not since Ridley Scott's "Blade
Runner", John Carpenter's "The Thing", or James Cameron's "Aliens" have
we seen a science fiction film with a vision of this caliber. After
viewing District 9, it will be clear to one and all why Peter Jackson
put so much faith in Blomkamp and took him under his wing as protégé.

Abandoning the usual settings of Hollywood sci-fi and placing us in the
harsh slums of South Africa, we are given an original piece of work
which takes risks in the way it tells its story. Not only does it go
against the expectations of audiences who have been trained to expect
mediocrity from their sci-fi, it goes above and beyond the call of duty
to provide us with spectacle as well as something to ponder after we've
downed our popcorn.

There is, thankfully, not an overused, overexposed celebrity in sight,
and every unknown face in the film gives a solid performance. The
aliens themselves, brilliantly realized with top notch CGI even manage
to make us feel something, only rivaled by Gollum from "Lord of the
Rings".

District 9 has so much to like. It's spectacular, darkly funny,
entertaining and thoughtful all at the same time, and it's all done on
a meager $30m budget. There is true talent on show here. If only there
were more films like this, the world of cinema would be a more
interesting place.