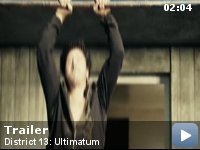 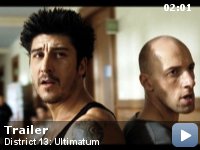 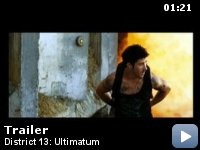 Damien and Leito return to District 13 on a mission to bring peace to the troubled sector that is controlled by five different gang bosses, before the city's secret services take drastic measures to solve the problem.

Storyline
After a successful mission against drug lords, the efficient Captain Damien Tomaso is framed at home with three kilograms of heroin planted by the police in his kitchen and he is arrested. Meanwhile a group of teenagers film the action of dirty agents leaded by Roland from the security agency executing policemen in their car and then leaving the car with the corpses in the 13th District to blame the gangs and begin a civil war. Behind these events, the corrupt chief of the security agency Walter Gassman had received a huge amount as kickback from the constructor Harriburton that has interest to construct buildings in the poor area and uses the situation to force the President of France to authorize to nuke five towers in the district. The teenager with the film is hunted by the police but he delivers the memory card to Leito meanwhile Damien calls him from the precinct asking for help. The…

Revealing mistakes:
At one point, the main character is using what seems like a monocular telescope to oversee the situation. The next shot confirms this when the screen shows as if you were looking through one. However, the device used is not a telescope, but a night vision monocular. Not only the model can be recognized (it's of "Yukon" brand), but also the 2nd (smaller) lens on the device, which is actually a IR emitter. Using this device at day will not allow to see very much. Moreover, the following shot of the telescope view should be green because thats what one sees when viewing in night vision.

Leïto:
What are you doing?


Highly enjoyable action movie. Great fights, stunts and a good story
which lead to a satisfying ending. Even after all this, I still prefer
the first movie, because it introduced us to Parkour. Few years later,
Parkour is popular the world over and it's because of films like this
and Casino Royale. The first movie had arguably the best action
sequences I'd seen for a long time, so it's no surprise for a sequel to
pop up, which cranks up the action 10 fold. Good performances,
especially from the two leads, who have the right chemistry for this
action comedy. Both Belle and Raffaelli are chief pratitioners in the
art of Parkour, but also show that they're pretty adept at acting too.
I hope they make a third movie because it would be great to see these
guys on screen together again. One of the better movies of the year
unsurprisingly and I say that because I knew what to expect whilst
watching this film and I wasn't disappointed. All in all a fun action
movie, that many will enjoy, I know I did.