Did You Hear About the Morgans? 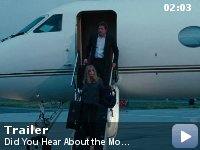 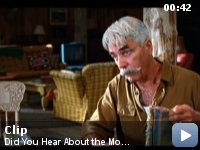 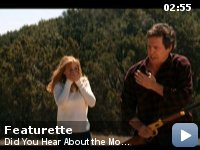 In New York City, an estranged couple who witness a murder are relocated to small-town Wyoming as part of a witness-protection program.

Storyline
Meryl and Paul Morgan have separated since his infidelity. He's a Manhattan lawyer, seeking forgiveness. She's moved on, focusing on real estate sales. As he walks her to an appointment one evening, pleading his case, they witness a murder; the murderer sees them. The FBI wants them in witness protection until the killer is caught. He's already hunting them. The FBI sends them to Ray, Wyoming, a tiny ranch town, where they stay with the aging sheriff and his gun-toting wife (who's his deputy). Meryl and Paul must sort out their relationship while their New York ways bump up against those of the West. Meantime, Meryl knows two things that Paul doesn't.

Taglines:
We're not in Manhattan anymore.

Errors made by characters (possibly deliberate errors by the filmmakers):
An experienced shooter like Emma would never allow a first-timer like Meryl to hold and fire a rifle as depicted in this film. By pressing her cheek against the side of the rifle while failing to secure the stock firmly with her shoulder, Meryl would likely have seriously injured herself as a result of the recoil produced by firing. This was demonstrated in the same scene when Paul injured his shoulder despite holding the rifle more correctly.

Paul Morgan:
I love you Meryl. If you are in fact Meryl, I can't really see.

Nothing more than a marketing ploy…


I attended the London movie premiere for this on Tuesday and there is
always one BIG PROBLEM about premieres… if the movie is bad you can't
leave. I realised very early on in this movie that I had a BIG PROBLEM.

Getting through this movie and hearing other people chuckle politely at
the jokes just so as not to offend SJP and HG made the atmosphere
unbearable. The storyline was terrible, the dialogue was predictable
and the characters were as if plucked straight from other movies: HG
was Charles from 'Four Weddings', Sam Elliot was Virgil from
'Tombstone', Mary Steenburgen was Clara from 'Back to the Future 3' and
SJP was Paula from 'Failure to Launch'… and you spend the entire
movie thinking about how much better all of those other movies were!

When this ended, I thought to myself "Why has this been made at all?"
and then it dawned upon me… MARKETING PLOY. SJP has SATC 2 coming out
next year and needs to get back into the public eye just before that
and HG needs to help his Ex (Liz) raise awareness for her charity. This
movie will get them some column inches in magazine and some exposure on
the Internet. It makes perfect sense now…

TagsUSA
Soul Kitchen
Up in the Air