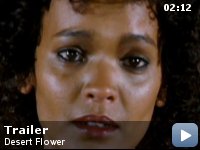 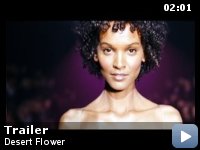 The autobiography of a Somalian nomad circumcised at 3, sold in marriage at 13, fled from Africa a while later to become finally an American supermodel and is now at the age of 38…

Storyline
The autobiography of a Somalian nomad circumcised at 3, sold in marriage at 13, fled from Africa a while later to become finally an American supermodel and is now at the age of 38, the UN spokeswoman against circumcision.

Taglines:
The extraordinary true story of the woman who crossed the desert and changed the world.

Anachronisms:
Lucinda (from the modeling agency) says to Waris she would be without broadband in Africa. Broadband didn't exist in the early to mid 80s when this story took place.

drama and fairytale, but not an easy movie

Desert Flower is a weird movie. It is based on the life story of Waris
Dirie, a super-model up there with Naomi Campel and Cate Moss. The
movie focuses on the time from just before her discovery until her big
success, with constant flashbacks of her childhood in Somalia and her
way to London. Liya Kebede plays a wonderful Waris Dirie, very lovely
and full of surprise and fear of the daily life we all take for
granted, while at the same time showing great bravery and a strong will
to fight for a better life. The rest of the cast is medium at best, a
positive exception only the character of Terence Donovan, the
photographer. The director did not resist
the temptation to give Waris a sort of “funny sidekick-friend” as well
as the stereotypical I-Jumped-Out-Of-“The Devil Wears Prada”-Movie –
manager, to add some slapstick-touch, which was totally unnecessary.


The movie does not leave anyone untouched though, it has some
heartwarming and touching as well as some very cruel and disturbing
passages. It is funny and sweet when Waris is struggling with the
British everyday life, making friends, and so on. It is hard to bear
when you are faced with drastic pictures of a 3 year old girl being
circumcised, with a 19-year old woman suffering still from this cruel
and brutal violation, and with the fact that a whole tradition tries to
justify this. And that is the main weak point of the movie. The changes
from the funny, light and sweet scenes to the brutal and cruel ones
come without warning. The editor or director does not give you the time
to set your mind to that kind of situation, and after a hefty scene
they just switch back to the light comedy-part as if nothing happens.
While I understand the intention, for me as a viewer I could not enjoy
the funny parts – which were never the less intended to entertain the
audience. I recommend this movie if you can handle the topic, but do
not look for a entertaining biopic with some depth. It has
entertainment, it has depth, but it tries to deliver both but never
brings it home all the way in the one or the other topic.